Actor Ayushmann Khurrana took to his Instagram to wish the perfectionist of the Hindi film industry Aamir Khan on his birthday. Take a look at the pics here

Ayushmann Khurrana is currently basking in the success of his recent releases, that have managed to struck a chord wit the audiences and have also been able to impress fans. The actor, on Saturday took to Instagram, where he enjoys a massive following to wish the 'Mr. Perfectionist' of Bollywood on his birthday. Take a look at the post of Ayushmann Khurrana wishing Aamir Khan here. 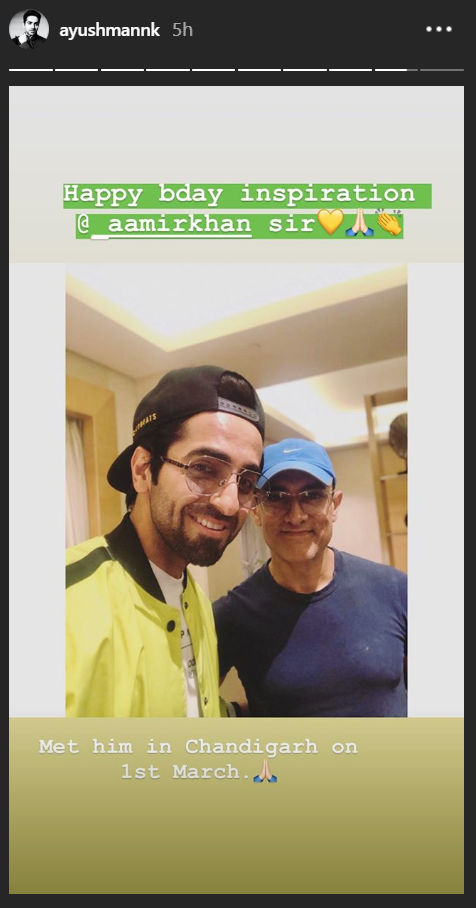 In the post, Ayushmann Khurrana can be seen wishing Aamir Khan on his birthday. Ayushmann captioned the picture by writing “Happy Bday inspiration Aamir Khan Sir” He also added a few emojis to wish Aamir Khan. In the picture, Ayushmann is also seen telling his fans that he met Aamir Khan on March 1, 2020, while Aamir Khan was in Chandigarh for the shoot of his upcoming film.

In this picture, Ayushmann is seen sporting a neon yellow jacket, a cap and glares. Aamir Khan is seen in a dark blue t-shirt and a light blue cap. To complete his look, Aamir Khan is also seen donning glasses.

Ayushmann Khurrana was last seen in Shubh Mangal Zyada Saavdhan where he played the role of a homosexual The film was loved by fans and opened to huge box office numbers. Ayushmann’s next appearance will be seen with legendary actor Amitabh Bachchan in the film Gulabo Sitabo. Apart from this, Ayushmann Khurrana  has several other projects under his belt.