'Baaghi 3' trio Tiger Shroff, Shraddha Kapoor, Disha Patani were in 'some confusion' at the airport . They were seen speaking to officials after coming out.

Baaghi 3 has been making headlines for its high-octane action sequences ever since the release of the trailer. While Tiger Shroff has been synonymous with the franchise, his leading ladies have changed over the three instalments. However, in an interesting development not just Shraddha Kapoor, the lead in the first part, returned to the franchise in the third part, even the lead of the second part, Disha Patani, has come back with a new song Do You Love Me for the action film.

While one doesn’t yet see Tiger being flanked by both his leading ladies in Baaghi 3, he was so on Saturday. The trio was seen making their way out of the Mumbai airport together. After greeting each other, Tiger-Disha, rumoured to be dating, and Shraddha Kapoor went their separate ways. However, moments later, they were once again seen together at the departure gate.

The stars were seen talking with the security officials present at the airport. Even one of their team members was seen explaining the situation to the officials.

The moments were captured by a paparazzi, who reported the incident as ‘some confusion’ that the trio faced for which they re-entered the airport for ‘some odd reason.’

While netizens did not spot the confusion, many had an interesting take on Shraddha’s behaviour after hugging Tiger, claiming she seemed to be ‘in love with Tiger.’ Others were happy to see Tiger being flanked by ‘two beauties’ and one even called them a ‘dream team.’ 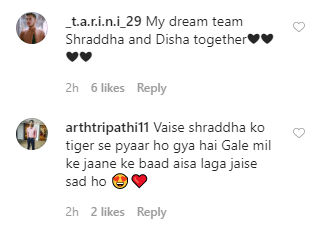 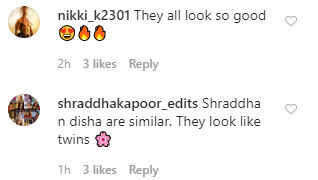 Meanwhile, Baaghi 3 directed by Ahmed Khan, is gearing up to release on March 6. The film has been produced by Sajid Nadiadwala and Fox Star Studios.  The action film also stars Riteish Deshmukh, Ankita Lokhande, among others.

READ: Whether TroyBoi Gets A Cheque From 'Baaghi 3' Team Or Not, His Net Worth Stands Tall