Irrfan Khan's son Babil was questioned about quarantine norms as he landed in another country. The actor answered the question of the follower. Read to know.

Irrfan Khan’s son Babil caught up with a friend in London as soon as he landed there. The actor seemed delighted to have met with his best friend once again and shared a series of pictures together. However, fans grew concerned about the safety of Babil and the rules of social distancing. Thus in the comments section, a person asked Babil about the quarantine rule and if he followed it or not, before going to meet his friend.

Babil answers a safety-related question asked by a fan

Son of Irrfan Khan, Babil was generous enough to respond to most of the comments that showed up on his feed. Thus, Babil responded to the follower who asked a question about his well-being. The fan jovially posed the question if there are no quarantine rules in London. To this Babil responded that he had all his tests done and everyone else he knows has been quarantined. Thus, he tested COVID-19 negative, he decided to meet his friend. 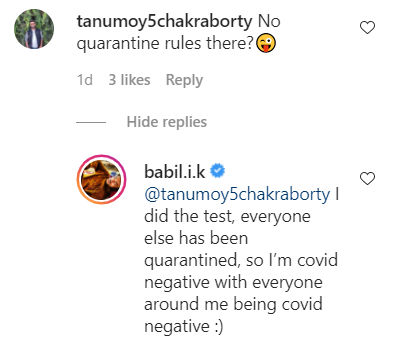 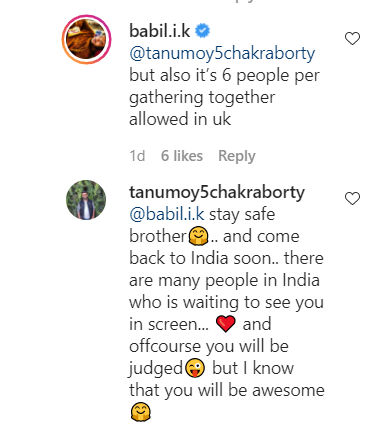 Further on, Babil once more commented on the follower's comment and this time he remarked that a gathering of 6 is allowed in London. Babil seemed like he wanted to clear the rules which are slightly different in the UK as compared to India. Thus clearing the air, Babil mentioned the ongoing rule and emphasised that 6 people are allowed to meet in public. Further on, the follower replied to Babil asking him to be safe and gave him his best wishes. He also urged Babil to come to India as soon as possible as many people are waiting to see him on the big screen. The follower wished him well for his career and said that he knows that Babil will be awesome when he finally decides to make his big-screen debut.

Thus, the conversation between Babil and the follower ended there. Babil is known to be interactive with his followers and he often has been spotted replying to the comments of his followers on his social media accounts. This has garnered him tremendous praise over time.