Bhavana Pandey has already decided what she will wear at Ananya Panday's wedding in the future. Have a look at the dress that she has in mind. Read ahead.

Bhavana Pandey recently took to Instagram to post a throwback picture from the time when she was dressed in a blue bridal outfit by Manish Malhotra. The designer also decided to share the picture and throw some light on his experience when working on it. Bhavana Pandey also revealed that she still has the dress and it is so intact that she is hoping to wear it on Ananya Panday’s big wedding day.

Bhavana Pandey has her dress ready for Ananya Panday’s wedding

Bhavana Panday recently shared a picture from her marriage ceremony where she was dressed in a Manish Malhotra design. In the picture posted, she can be seen dressed in a blue, heavy work traditional outfit while husband Chunky Panday was wearing a white blazer with a yellow tie. In the caption for the post, she had written that the picture was taken twenty-two years back and she still loves her Manish Malhotra dress.

The picture was later shared by Manish Malhotra on his official Instagram while he recollected what it was like to work on this dress. He also recollected that she was the first real bride that he worked on. He chose the soft powder blue colour because he always wanted to be different and back then he did not have his label in place. He also had a special place in the caption for the beautiful and charming bride, Bhavana Pandey.

Bhavana Pandey commented on the repost made by Manish Malhotra and said that she still has the dress intact and stunning. She also wrote that she will hopefully fit into the piece once again soon. Towards the end, she has mentioned that maybe she will wear the dress at Ananya Panday’s wedding.

Also read Vijay Deverakonda And Ananya Panday's 'Fighter' To Get A New Title Before The Release?

Ananya Panday also commented on the picture as Manish Malhotra has spoken about dressing and designing for her in the film Student Of The Year 2. She wrote in the comment that he is the “real OG”. She also added a few red hearts and the kiss emoticon in the comment to express her emotions better. Have a look at the comments on his post here. 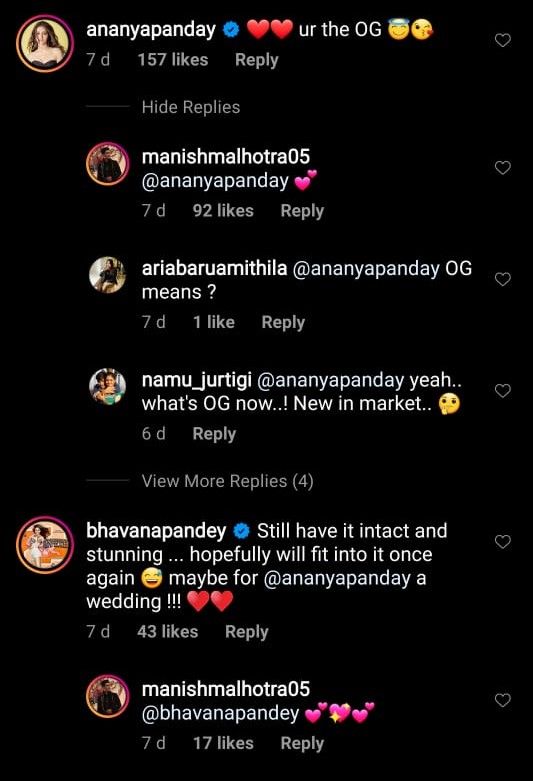 Read Ananya Panday's Throwback Picture As She Wishes Her Aunt, Points Towards Her Love For Cake

PEOPLE HAVE PLEDGED SO FAR
LATEST NEWS
View all
2 hours ago
Akshay kumar's net worth after 4 decades in bollywood will leave you astounded, read here
2 hours ago
Priyanka chopra vs deepika padukone: who rocked the black, plunging neckline dress better?
2 hours ago
Want to know what ingredients kareena kapoor khan used in her summer face mask? read here
2 hours ago
33 years of mr india: anil kapoor on reconciling with kishore kumar, laxmikant pyarelal
2 hours ago
Kangana ranaut's office at pali hill is a dreamy workplace for her; bts videos surface