Bhumi Pednekar shared a video made by her fan that depicts all her on-screen characters from 'Dum Laga Ke Haisha' to 'Bhoot'. Check out how Bhumi reacted.

Bhumi Pednekar shared a video made by her fan on her Instagram story in the wee hours of the day. The video made by Bhumi's fan is captioned as 'Safar' and has paintings of all on-screen characters from Bhumi Pednekar's films like Dum Laga Ke Haisha, Toilet: Ek Prem Katha, Shubh Mangal Saavdhan, Lust Stories, Bala, Sonchiriya, Pati Patni Aur Woh and Bhoot Part One: The Haunted Ship. 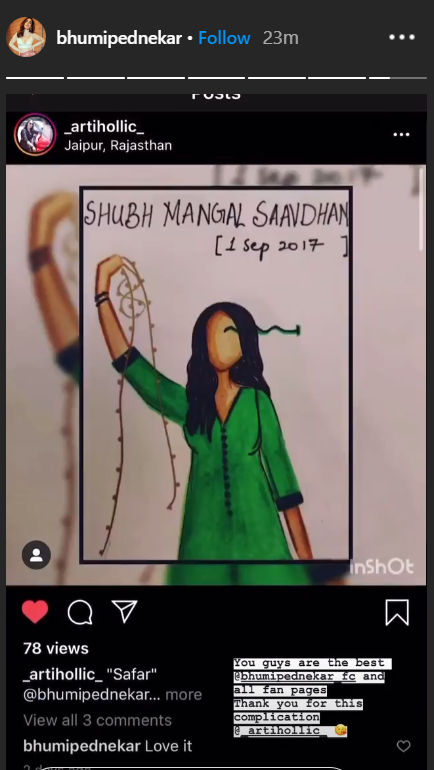 Earlier, Bhumi Pednekar's photos with sister Samiksha Pednekar stormed the internet. The sister duo shared a series of pics on their social media handles sending fans into a frenzy. The photos see Bhumi and Samikhsa gossiping in bed, munching some food, and adorably posing for the camera. Bhumi Pednekar's photos garnered a lot of attention on the internet, as fans gushed to drop comments on the pictures. While a user called them "Twins", some also dropped hearts on the post.

Bhumi has many films lined up in the kitty for the years 2020-21. Bhumi Pednekar was last seen with Vicky Kaushal in Bhoot: The Haunted Ship. The actor will next be seen on the big screen in the upcoming film, Dolly Kitty Aur Woh Chamakte Sitare. The comedy-drama also stars Konkona Sen Sharma, Vikrant Massey and Amol Parashar.

The Bollywood diva also has two widely spoken films in her kitty, namely, Durgavati and Karan Johar's multi-starrer movie Takht. However, the release dates of these movies are yet to be officially announced. While Durgavati is a horror-thriller starring Akshay Kumar and Arshad Warsi, Takht is a periodic drama featuring an ensemble cast of Ranveer Singh, Kareena Kapoor Khan, Alia Bhatt, Vicky Kaushal, Janhvi Kapoor and Anil Kapoor in the lead roles.

LATEST NEWS
View all
10 hours ago
Sonakshi Sinha gives a sneak peek into episode four of 'Full Stop to Cyber Bullying'
6 hours ago
Air India plane crash: Akshay, Farhan, Raveena, Preity and others express condolences
7 hours ago
'Important to be sensitive to each other': Angad Bedi on 'Gunjan Saxena' boycott calls
6 hours ago
Ankita Lokhande pictured in her car with a smile on her face; See video here
11 hours ago
Janhvi Kapoor shares experience of working with 'best co-star' Pankaj Triptahi | Watch