During the Coronavirus pandemic, it is of utmost importance that everyone acros takes several preventive measures to stay fit and healthy during such difficult times. Every year, April 7 is celebrated as World Health Day, and Chandro Tomar, aka Shooter Dadi, celebrated it by practising yoga. The Bala actor Bhumi Pednekar who essayed the role of Tomar in the film Saand Ki Aankh and the reel-life character played by her was inspired by the real-life, 88-year-old, Chandro Tomar after she posted a '#worldhealthday' photograph on Instagram.

Pednekar captioned the post writing, " At 88 she is still a baller. She knows health is wealth. #worldhealthday" 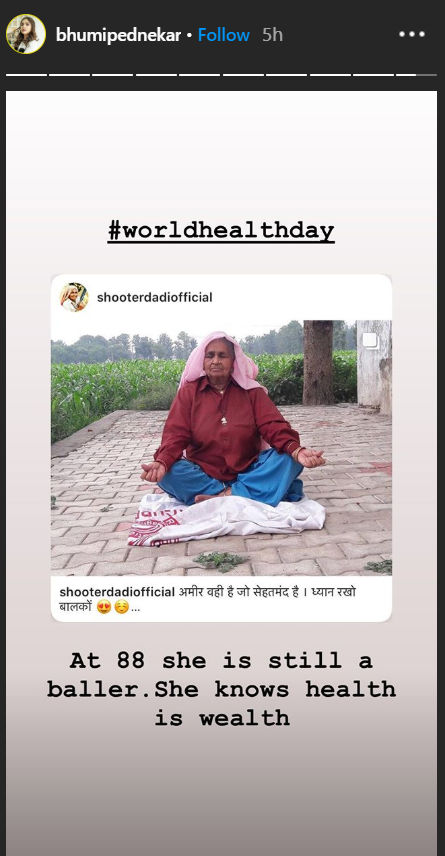 Talking about Saand Ki Aankh, the film released in Diwali last year, on October 25, 2019. The film starred Bhumi Pednekar and Taapsee Pannu in the lead roles. The story of the Tushar Hiranandani directorial revolves around the lives of the oldest sharpshooter sisters in the world, Chandro Tomar and Prakashi Tomar. Bhumi played the role of the elder sister Chandro Tomar, while Taapsee Pannu played the role of the younger sister Prakashi Tomar. The film also featured Vineet Kumar Singh, Pawan Chopra, and Shaad Randhawa in the supporting roles.