On the occasion of Vicky Kaushal's 32nd birthday, Bhumi Pednekar penned down a heartwarming wish for her 'Bhoot' co-star. Read on to know details.

As Vicky Kaushal celebrates his birthday today, many celebrities are taking to their social media and wishing him. Similarly, Bhumi Pednekar penned down a beautiful wish for her Bhoot co-star as he celebrates his 32nd birthday amidst lockdown. She shared a black and white picture with Vicky Kaushal and wrote a sweet caption on it.

In the caption, Bhumi Pednekar praised Vicky Kaushal for his acting skills and reminded him that he is always able to entertain his audience. Moreover, she said that she cannot wait to watch more of his movies in the future. In the end, she wrote that Vicky Kaushal gets whatever he wishes for. Check out the post below. 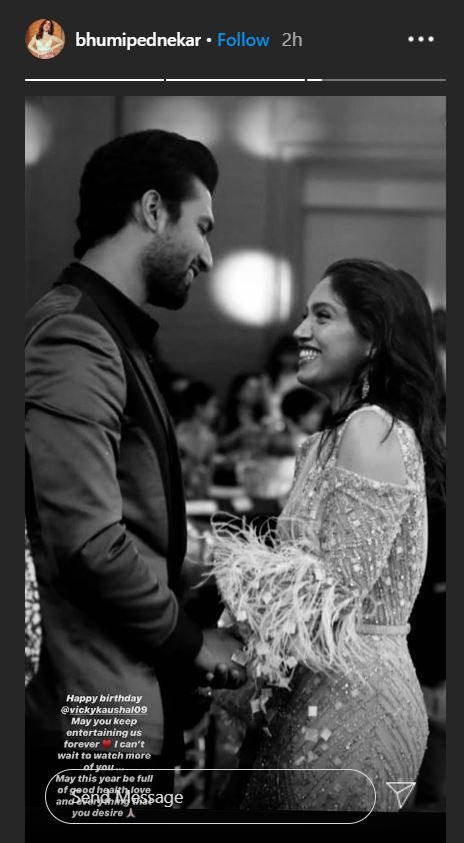 The two were last seen in Bhoot Part One: The Haunted Ship together. The movie was well-received by fans and critics alike. The movie did not get big numbers at the box office and could only manage to stay afloat.

As Vicky Kaushal is a popular actor in Bollywood, he is adored by his co-stars as well. While there were numerous fans pouring their love out for the actor, several celebrities wished him too. From Taapsee Pannu to his brother, all wished him on their social media handles.

Read Also | Bhumi Pednekar's Workout Videos Will Motivate You To Sweat It Out At Home; Watch

The actor recently opened up to a leading media portal where he expressed his thoughts on celebrating his birthday in quarantine. Vicky Kaushal revealed to a media portal that he had never thought that a situation like lockdown could ever arise which could bring the world to a standstill. He further said that he never imagined celebrating a birthday in situations like today. The actor recalled his birthday celebrations in his childhood days where it was just about having a good time with friends.

Read Also | Bhumi Pednekar Has A Number Of Big Projects In Her Kitty; 'Durgavati', 'Takht' And More

On the work front, Vicky Kaushal was last seen in Bhoot Part One: The Haunted Ship. According to leading media portals, the actor has many projects lined up his way. One such film is Sardar Udham Singh.

On the other hand, Bhumi Pednekar has had a busy year career-wise. She featured in Shubh Mangal Zyada Saavdhan, Bhoot, and Pati Patni Aur Woh. According to media portals, the actor will be seen next in movies like Dolly Kitty Aur Woh Chamakte Sitare and Durgavati.

Read Also | Did You Know Bhumi Pednekar's Jaya In 'TEPK' Has A Reference To Hrithik Roshan?