Bobby Deol took to Instagram on Tuesday, February 23, 2021, to share a glimpse of his performance during the Indian Pro Music League. Watch the video.

Gadar: Ek Prem Katha actor Bobby Deol took to Instagram on Tuesday, February 23, 2021, to share a glimpse of his performance during the Indian Pro Music League opening ceremony. The actor also penned a sweet note revealing details about the video. On seeing this post, fans went all out to comment on all things happy and nice.

Taking to his Instagram handle, Bobby Deol shared a short video of his performance at a ceremony. At the starts of the video, Bobby is seen entering on the bike and gives some tough looks. In the video, Mika Singh and a few other singers went on to sing the much-acclaimed song titled Jumme Ki Raat. Few seconds into the video, Bobby goes on to make a grand entry and dances with the singers. He can be seen donning an all-black outfit and completed his look with a stunning jacket. They all seem to have too much fun in the video.

As soon as Bobby Deol shared the post online, fans went all out to comment on all things happy and nice. Some of the users went on to laud the actor’s performance, while some went on to go all gaga over the video. One of the users wrote, “what a performance. Truly love it”, while the other one wrote, “this is too good”. Check out a few more comments below. 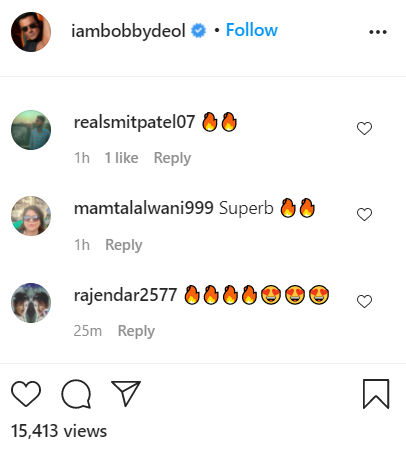 Apart from this, the actor was recently honoured with a prestigious award and shared this delightful piece of news with all his social media fans and followers. The actor recently took his Instagram handle and shared this blissful photo of himself with his mother, Prakash Kaur. In the photo, Bobby Deol's mother can be seen hugging her son tightly and lovingly looking at him with a broad smile on her face.