Bollywood actor Anushka Sharma and Indian cricket team skipper Virat Kohli make an adorable couple when it comes to their social media banter as they often pull each other's leg with their comments. Earlier on Saturday, while Virat Kohli could not stop raving about wife Anushka Sharma's newest production Paatal Lok through his Instagram post, celebrity hairstylist Aalim Hakim joined him in praising the efforts of the entire team for the Amazon Prime Video series. However, it was Anushka's response to the honest review by Hakim that made her fans laugh out loud.

In the post, the Indian cricket captain shared a picture while enjoying the show on his laptop and said that he found it to be a ‘masterpiece of story telling, screenplay and tremendous acting.’ The Team India star recalled how he felt vindicated after viewers similarly showered love on Paatal Lok. He expressed pride in his ‘love’ Anushka for producing a ‘gripping series’ and believing in her team. Virat also had a word for his brother-in-law Karnesh for work on the series and said, ‘well done brother.’

Hairstylist Aalim Hakim had been one of the firsts to comment on Virat's post and agreed with his review as he called Paatal Lok a 'kickass show' and lauded the production team including Anushka Sharma.

Anushka replied to him, in a seemingly exhausted and hilarious manner, and said, "Can't wait for you to cut Virat's hair so I can STOP!". Fans of the couple could not stop themselves from a laugh as they showered likes for Anushka's comment. 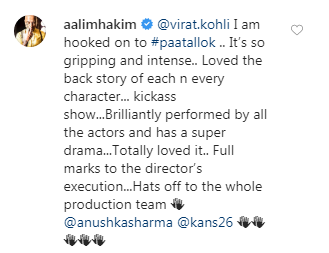 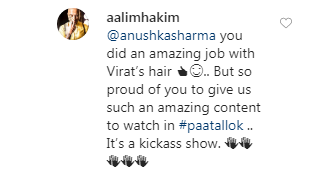 Paatal Lok has been written by Sudip Sharma, Sagar Haveli, Hardik Mehta and Gunjit Chopra and directed by Avinash Arun & Prosit Roy. The story traces the journey of a police officer investigating an assassination attempt on a journalist and the subsequent nabbing of four suspects. The series stars actors Jaideep Ahlawat, Neeraj Kabi, Gul Panag, and Abhishek Banerjee among others. The story is narrated in nine episodes.

Read | 'Till the time I'm playing the sport, I will be a maniac': Virat Kohli to Sunil Chhetri