As fans await the release of 'Bachchan Pandey', here are adorable pics of Kriti Sanon and Akshay Kumar from their Housefull 4 times that are simply too cute.

After the success of Housefull 4, Kriti Sanon and Akshay Kumar are all set to feature in their second film together, Bachchan Pandey. The movie said to be a remake of the 2014 movie called Veeram where a villager fights with the enemies to protect his family. The movie will be directed by Farhad Samji and will reportedly release next year. As the audience awaits Kriti and Akshay's next venture, check out their adorable pics together.

Kriti Sanon shared a picture of their characters Madhu and Bala from the sets of Housefull 4. This was apparently the first pic they clicked while portraying their past characters for the film. Housefull 4 showcased a story in two timelines where the theory of reincarnation can be seen in the movie's plot.

Kriti shared a heartwarming pic with costar Akshay Kumar. The movie was released in October 2019 around Diwali. Housefull 4 was also directed by Farhad Samji, who has signed these two actors for his next movie Bachchan Pandey. 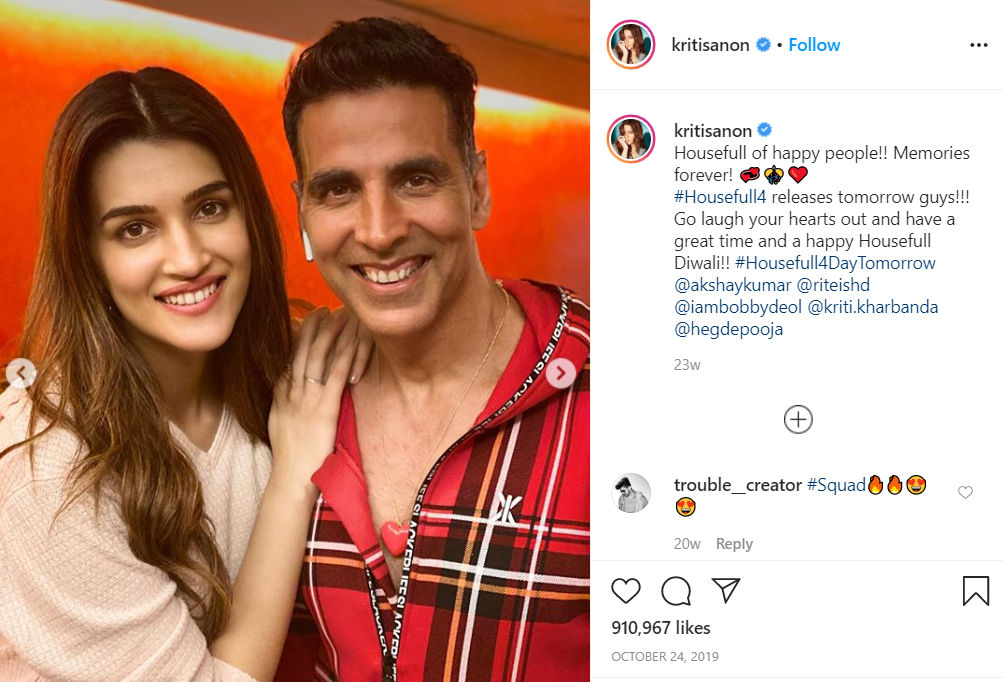 ALSO READ| Kriti Sanon's Diet: What Does She Eat In A Day To Maintain Her Glowing Skin And Fit Body?

Kriti Sanon shared a pic of her and Akshay posing as the bald and the beautiful. Here Kriti can be seen appearing in her modern character whereas Akshay is seen as his 1419's 'Bala' avatar. She captioned the post with a witty line and hashtag.

Kriti and Akshay twinning in black

Kriti Sanon shared this first pic with Akshay Kumar when they started the Housefull 4 promotions. She connected their twinning in black coincidence to some "punar janam telepathy". Take a look.

PEOPLE HAVE PLEDGED SO FAR
LATEST NEWS
View all
1 hour ago
Parineeti Chopra pens cute birthday wish for father; says, he 'put singing into my veins'
3 mins ago
Anushka Sharma speaks about her role as producer and her wish to explore unique ideas
15 mins ago
Kareena Kapoor Khan's photo of 'playful' Taimur on Saif Ali Khan's back is adorable