KRK Invites Those Who Are Worried To His 'corona Free' House; Netizens Have Fun Responses

Kamaal Rashid Khan aka KRK invited the worried to his 'corona free' house amid the coronavirus/COVID-19 pandemic. Netizens had fun responses to his tweet.

Advisories are being issued by governments, doctors, health organisations and experts on preventing the deadly coronavirus/COVID-19. As the virus continues to take lives while affecting more people in new places, citizens have been taking precautions to be safe. Kamaal Rashid Khan, however, is not worried as he claims to live in a ‘100 % corona free’ house.

READ: KRK 'prays' For Coronavirus To Spread In India; Netizens Bash Him For Insensitive Tweet

KRK took to Twitter on Monday to post pictures of his house, reportedly based in Dubai. He tweeted that there was no way the virus could enter his house. The Ek Villain actor even invited people who are looking for a ‘safe place’ to his house.

My home is 100% corona free. Corona can’t reach to my home at any cost. So if you are looking for a safe place then come and stay at my home! pic.twitter.com/DpnWSIuT2c

Netizens had fun responses to it. Many of them were in disbelief that KRK could have a swanky house, like the pictures suggested, and asked where he downloaded the pictures from.

However, some came out in his support, sharing pictures of the villa from Google and a few of them called it ‘beautiful.’

Some netizens quipped that they were more worried about the bigger virus named KRK, and the Deshdrohi actor was sporting to even retweet those comments. 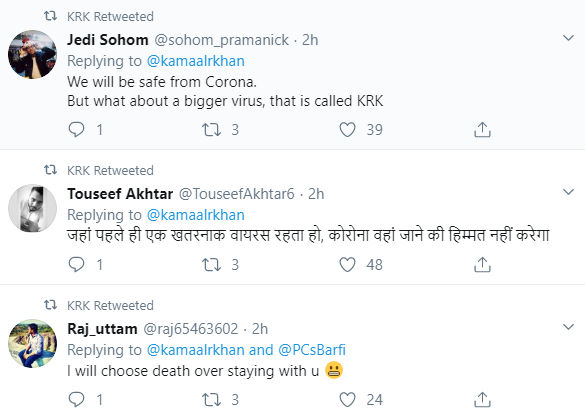 The actor-’critic’ is known for his quirky tweets, however, his tweet a few days ago did not go down well with netizens. KRK had stated he was praying that the virus comes to India, so that it unites people of all faiths. This was even before India started reporting cases, and the figure has now touched 114, with two deaths. Even UAE has reported close to 100 cases.

READ: Valentine's Day: KRK Has Unique Reason To Not Celebrate, Netizens Say 'joke Of The Year'

Meanwhile in India, most of the state governments have urged educational institutions, malls and theatres to remain closed. Numerous workplaces have also adopted the ‘work from home’ approach. Those returning from abroad, and those facing symptoms are being subjected to the relevant tests.

PEOPLE HAVE PLEDGED SO FAR
Vicky Kaushal's throwback pics as Army officer in 'Uri' his fans must not miss
Hrithik Roshan was the first choice for Farhan Akhtar's 'Don'? Know why he missed out
Arjun Kapoor's memorable photos with his co-stars that are worth checking out
Anushka Sharma asks an interesting question on Instagram, gets mind-blowing responses
B-town celebs post wishes for choreographer-director Remo D’Souza on his 46th birthday
DO NOT MISS
PEMA KHANDU ON NATIONAL LOCKDOWN
OWAISI ON NIZAMUDDIN CASE
WATCH: PREGNANCY Q&AS
'NIZAMUDDIN MARKAZ CREATING IMPACT'
HOW ACCURATE ARE TEMPERATURE GUNS?
FANS EXCITED FOR KOHLI-KP TALK