Ranveer Singh recently shared a picture of himself as Joe Exotic on his social media. Deepika Padukone and Arjun Kapoor dropped hilarious comments on the post.

Due to the recent coronavirus outbreak, many Bollywood actors have been quarantining at home. Ranveer Singh and his wife, Deepika Padukone have been doing the same as well. The couple regularly shares hilarious updates about how they are spending their time. Ranveer Singh recently took to social media to share a Tiger King meme of him and fans find it hilarious.

Ranveer Singh recently took to social media to share a morphed picture of himself as Joe Exotic from the Netflix show, Tiger King. The picture shows his face instead of the zookeeper Joe Exotic’s face. Accompanying him in the picture is a gorgeous, enormous Tiger starring into the camera.

However, what took away our attention was how Deepika Padukone and Arjun Kapoor were pulling Ranveer Singh’s leg in the comments section. Both the comments were somewhat a reality for Ranveer Singh. His wife Deepika Padukone commented asking him that there is no reason for him to find this picture funny as that is him almost every day. Additionally, Arjun Kapoor also commented, “Casual day for Baba” as he sweetly refers to him. 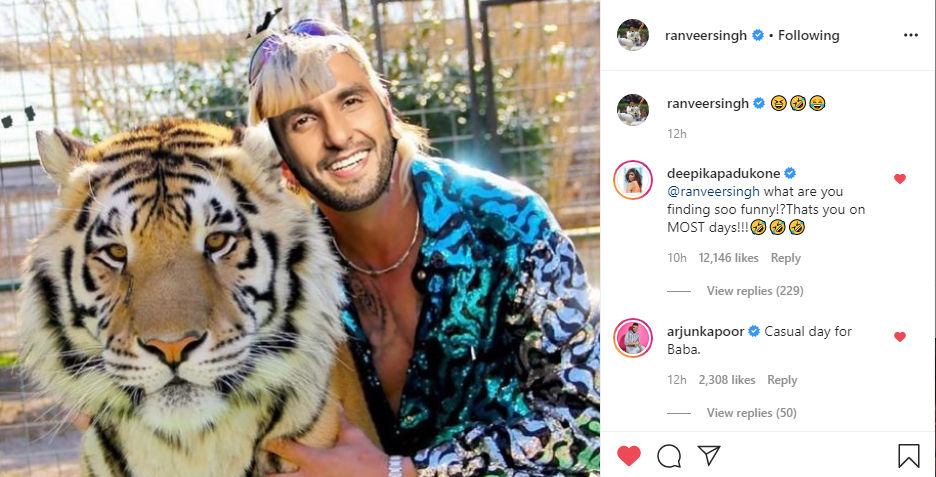 Netflix’s Tiger King has been the talk of the town ever since it was released last month. The gripping plot and meme-worthy moments have gained extreme popularity on the internet. The show revolves around the story of a zookeeper Joe Exotic who is also one of the biggest tiger breeders in the US. Joe Exotic is currently behind the bars after being convicted for animal abuse and murder for hire charges.

PEOPLE HAVE PLEDGED SO FAR
LATEST NEWS
View all
3 hours ago
Casting director Krish Kapur passes away at the age of 30 in a road accident
4 hours ago
Varun Dhawan shares a mesmerizing view of how his surrounding looks like during monsoons
4 hours ago
Cyclone Nisarga: Sanjay Dutt, Sidharth Malhotra urge fans to follow guidelines
4 hours ago
Shruti Seth's fitness routine amid lockdown is super motivational; Watch
2 hours ago
When Kareena Kapoor Khan stated she won't let linkup rumous with Hrithik affect their bond