Deepika Padukone revealed that she is indeed one of the first few people to catch a glimpse of Kapil Sharma's newborn daughter. Read the story below-

Through a comment on Instagram, Deepika Padukone revealed that she is indeed one of the first few people to catch a glimpse of Kapil Sharma's newborn daughter. Just yesterday, the actress appeared on the show with director Meghna Gulzar to promote their film, Chhapaak. A popular photographer shared a picture of the two from the sets and captioned the picture asking if the ace-comedian has shown the actress his newborn baby's picture. To which Padukone commented saying, “He did! & she’s adorable!”

The actor was all smiles as she greeted the audience when she was introduced by the host of the show. She was wearing a boho style pink ensemble with matching pants. The actor also added a similar coloured jacket to complete the look. Deepika also wore heavy silver earrings and several bracelets on her wrist to complete the boho look 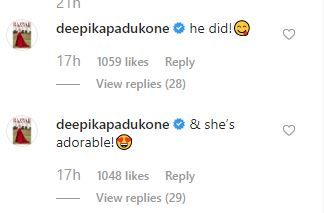 Kapil announced on Monday that he and Ginni have become proud parents of a baby girl. “Blessed to have a baby girl. Need ur blessings. Love u all. Jai mata di,” he wrote on Twitter. Several celebrities, including Anil Kapoor, Himansh Kohli and singer Guru Randhawa, congratulated the couple on the new addition to their family.

On the work front for Deepika:

The trailer of Chhapaak has gained several positive reviews from fans and many superstars as well. The film is based on the story of Laxmi Agarwal who was an acid attack survivor. The film will see Deepika playing the role of Malti who fights against the system to ban the unregulated sale of acid. Vikrant Massey will be seen playing her love interest in the film. The movie is co-produced by Deepika herself and is expected to release on January 10, 2020.

READ: Deepika Padukone Breaks Down During The Launch Of Chhapaak; Watch Video

PEOPLE HAVE PLEDGED SO FAR
Ira Khan's out-of-the-box poses in these pictures will make you want to copy her!
Dabboo Ratnani on Kiara and Bhumi's calendar shoot; says 'Expected similar reactions'
Hrithik Roshan shares heartfelt message for V Unbeatable after 'America's Got Talent' win
Kunal Kemmu has 'the whole world in his hands'; here's why
Sonam Kapoor's photos with her sisters show their bond is unbreakable!
DO NOT MISS
AZAD: 'WILL PAY FOR EVERY CRIME'
YOGI, RUPANI SNUBBED AFTER KEJRIWAL
CONGRESS QUESTIONS SENA ON CAA-NPR
SISTER LUCY LAUDS VICTIM'S COURAGE
HRITHIK & FAMILY'S MAHASHIVRATRI
PM MODI ON GENDER JUSTICE