Deepika Padukone Is An Unabashed Cheese Lover, This Picture Is The Proof

Deepika Padukone recently took to her Instagram to share a picture where she revealed her favourite pizza topping. Take a look at the picture to know more.

Actor Deepika Padukone is one currently seen with husband Ranveer Singh promoting their film '83. Deepika recently took to her Instagram to share a picture where she revealed what her favourite pizza topping is. Take a look at the picture here. 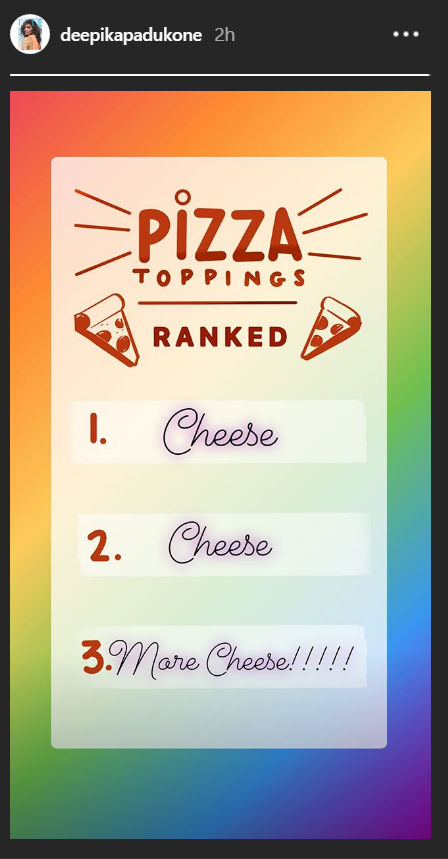 Deepika Padukone was last seen in the film Chhapaak where she played the role of an acid attack victim who went against all odds. Now she will be seen in the film 83. 83 stars Ranveer Singh, Tahir Raj Bhasin, Amrita Puri, Pankaj Tripathi, Boman Irani, Saqib Saleem, Harrdy Sandhu, Ammy Virk and Sahil Khattar in significant roles alongside Kapil Dev. This film is a story of the 1983 world cup that India won and the film will also show the what used to happen in the dressing room of that tournament. Former Indian skipper Kapil Dev has expressed that a lot of things happen at the hotels and team meetings that are unknown. The film will showcase them and will leave fans amused.