Reacting to the fire in Delhi's Anaj Mandi, Riteish Deshmukh, Shatrughan Sinha said they were 'saddened'. They expressed their condolences to the families.

The death of 43 persons in a fire in Delhi’s Anaj Mandi put in the country in grief on Sunday. Netizens and also the celebrities from various fields expressed their sorrow over the tragedy. Even stars from the film industry were shocked with the news and shared their thoughts on social media. Shatrughan Sinha, Riteish Deshmukh and Shaan reacted to the fire. Terming it as ‘saddening’, ‘dreadful’ and ‘disturbing’, they conveyed their condolences to the victims’ families and sent their good wishes for the speedy recovery of the injured.

As soon as the reports on the fire started doing the rounds, Shatrughan Sinha wrote on Twitter, “Dreadful, most disturbing & saddening to hear about the tragic #FireAccident in the #AnajMandi in Delhi. My deepest condolences & prayers with the families who lost their loved ones. Hope, wish & pray for the speedy recovery of those injured. A humble appeal to the Govt/Society. for immediate response, relief & appropriate compensation. #DelhiFireAccident. Riteish’s tweet read, “Extremely saddened to hear about the #DelhiFire accident - Condolences to the to families who lost their loved ones and prayers for the speedy recovery of the injured.” 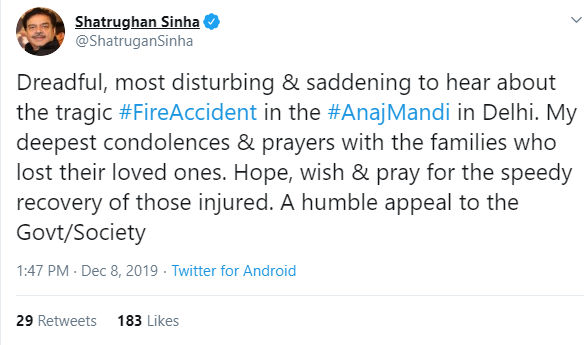 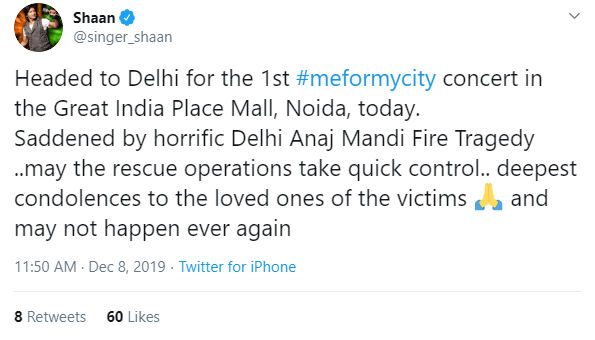 Shaan felt bad since he was set to perform in Noida, near Delhi on the same day. “Headed to Delhi for the 1st #meformycity concert in the Great India Place Mall, Noida, today. Saddened by horrific Delhi Anaj Mandi Fire Tragedy ..may the rescue operations take quick control.. deepest condolences to the loved ones of the victims and may not happen ever again,” he wrote.

43 persons were killed at Anaj Mandi, a factory that produced plastic items, after a fire that started at around 5.20 AM on Sunday. The fire brigade rushed to the spot and attempted rescue efforts. The injured are recovering at the LNJP and Lady Hardinge Hospitals.  Deputy Fire Chief Officer Sunil Choudhary informed media, "A fire broke out in a 600 sq feet plot. It was very dark inside. It is a factory where school bags, bottles and other materials were kept." "Till now we have rescued more than 50 people, most of them were affected due to smoke," Atul Garg, Chief Fire Officer, Delhi Fire Service said.

Delhi Police told media, "There were a lot of plastic materials which were hindering our rescue efforts. Due to the rising smoke from these plastics, most of the deaths have occurred due to asphyxiation. When the fire department and Delhi police tried to rescue them, two fire officers and 2 police officers have been hurt in the operation due to the smoke."