Devon Ke Dev…Mahadev actor Sonarika Bhadouria recently gave a befitting reply to a netizen who trolled her for loose-fitted jeans. Take a look.

Devon Ke Dev…Mahadev actor Sonarika Bhadoria recently replied to a netizen who made a comment on her look. The actor posted a series of pictures of her wearing a red off-shoulder top and ribbed jeans. In the comment section of Sonarika’s post, one of the netizens pointed out that she is wearing loose fitted jeans. He asked her why she wore a pair of jeans of '34 waist size' when she has a '28 waist size.'

Sonarika Bhadoria furiously replied to the user and asked whether his father was the one to pay for her jeans. She further said that since that is not the case, it would be better for him to just shut up. The actor received mixed responses to her reply. Some users called it a savage reply while some went on to say that she was just being rude. Talking about Sonarika Bhadoria’s look, she accessorised her look with a layered statement choker necklace. The actor donned a glammed up look with winged eyeliner and red lip colour. She completed her look with an open hairstyle. The Devon Ke Dev…Mahadev actor shared the picture with the caption, “Are you lost baby boy?”. 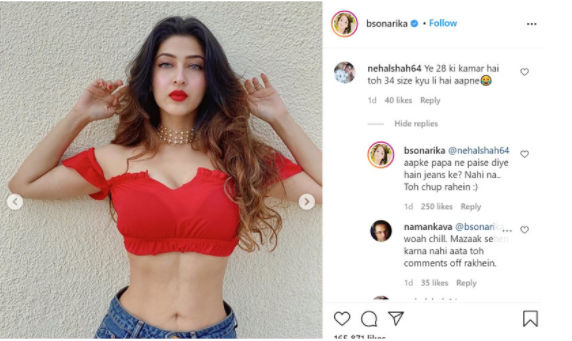 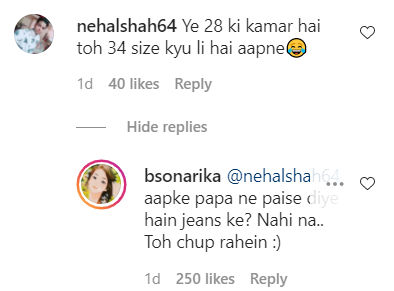 Devon Ke Dev… Mahadev is a mythological drama series featuring Mohit Raina, Sonarika Bhadoria, and Mouni Roy in the lead role. It is based on the Hindu God Lord Shiva, who is also known as Mahadev. Devon Ke Dev…Mahadevâ€‹â€‹â€‹â€‹â€‹â€‹â€‹ premiered on December 18, 2011, on Life Okay. It ran for three years until December 14, 2014, with a total of 820 episodes. However, during the COVID-19 lockdown, it started running on Star Bharat and Star Plus since March 17, 2020, and April 14, 2020, respectively. Moreover, Devon Ke Dev… Mahadev has also aired on the newly launched Shemaroo TV from May 1, 2020.

Rashami Desai claps back at a hater on Twitter

Earlier, a Twitter user, who had Sidharth Shukla’s display picture and claimed to be a fan of the actor took to Twitter to write, “Rashami is the reason to make Sidharth Shukla’s life hell for the six months they were together on Bigg Boss 13". The Twitter account even used abuses to pour hate on Rashami. However, Rashami Desai reacted in a dignified way and shut down the troll.

Rashami Desai used a screenshot of the post and shared it on her own account. She wrote, “Thank you for your blessing. Waking up to this is a big thing!!!! I am grateful to you that you actually thought of me in your busy lifestyle Folded hands.  My family is num and people who hate me I’m sure must be happy after reading this.” Rashami Desai’s response was hailed by several of her fans. 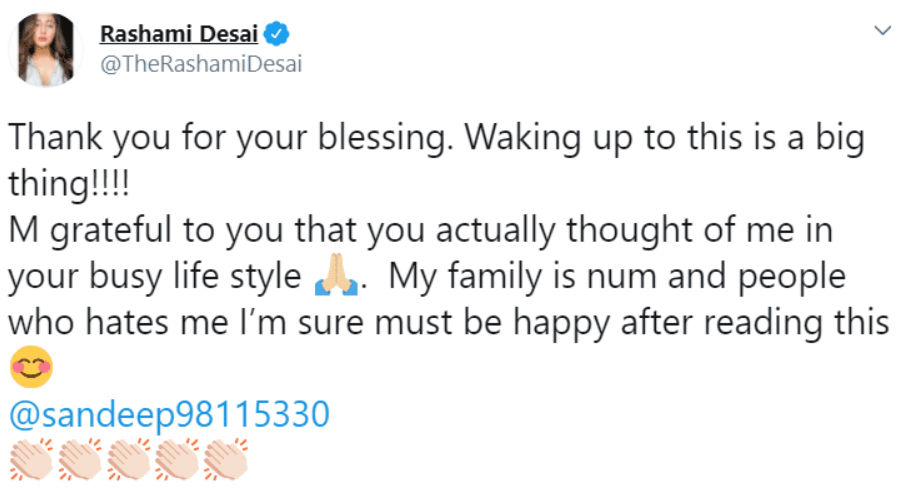