Unseen Pic Of The Day: Guess Which Bollywood Celebrity's Childhood Pic Is This?

Also Read: Dia Mirza Explains The Importance Of An Individual's Voice; Says 'Ignite The Fire Inside

She took to her Instagram handle to share a monochrome childhood picture of herself. A baby Dia can be seen donning a tiny polka-dotted attire. By the looks of it, she can be seen playing with a toy puzzle. The picture has a cut-out of an elephant and a camel kept beside her. The Love Breakup Zindagi actor can be seen giving out a curious expression in the endearing candid frame.

She also had a beautiful caption to go about with her picture. Sharing the picture, Dia wrote, 'All things bright and beautiful... all creatures great and small... Let the wonder in our hearts never cease to exist, let the child in us each day be born.' She also added the hashtag, #FlashbackFriday. Some of the fans went on to react to the picture calling it cute. Take a look at the picture shared by the actor along with the reaction of the fans to the same. 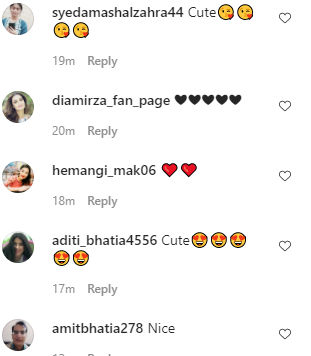 Recently, the actor had mesmerized her fans with a stunning picture of herself. In the picture, Dia could be seen striking a pose beside a window while sporting a light pink off-shoulder top paired with a skirt. Keeping her makeup subtle, the Lage Raho Munna Bhai actor went for nude lips. Accessorising her overall attire, she opted for a pair of flower-shaped earrings. Take a look at the ethereal picture shared by her.

Meanwhile, on the work front, Dia was last seen in the movie Thappad. She played a widow and a mother of a teenage girl in the movie. It was helmed by Anubhav Sinha and starred Taapsee Pannu, Ratna Pathak, Pavail Gulati and others in pivotal roles.