Diana Penty Shares A Glimpse Of Her Time At Home Amid Lockdown; See Pics

Diana Penty is spending her time in quarantine and from what it looks like, she is having a good time with her furry friend along with a nice cup of tea.

Diana Penty is spending her time in quarantine and from what it looks like, she is having a good time with her furry friend. The actor has been giving fans glimpses of how her life under quarantine looks like as she goes on to share some throwback pictures and many more. The actor recently shared a post where she seems to be relaxing and unwinding during this time.

Diana Penty recently took to Instagram to share a couple of pictures of her relaxing with a hot cup of tea along with her furry friend. In the pictures, Diana Penty can be seen wearing an ash grey t-shirt, white shorts sitting near her gallery door with a cup of tea. In one of her pictures her pet dog, Vicky can be seen beside her while she is busy staring at the sky. She also went on to put a dialogue box on him and wrote, “Loco Chica… What you looking at??? Drama!”

Along with the pictures, Diana also captioned each picture differently. She wrote in one wishing everyone “Happy International Tea Day.” In the other she wrote, Golden hour + chai = bliss.” Check out the pictures below.

Seeing this post, fans went on to compliment the actor for her stunning appearance and beauty. Some also praised her picture with her pet. Some of the fans wrote saying, “So beautiful,” “Incredible beauty,” and many more. Check out a few comments below. 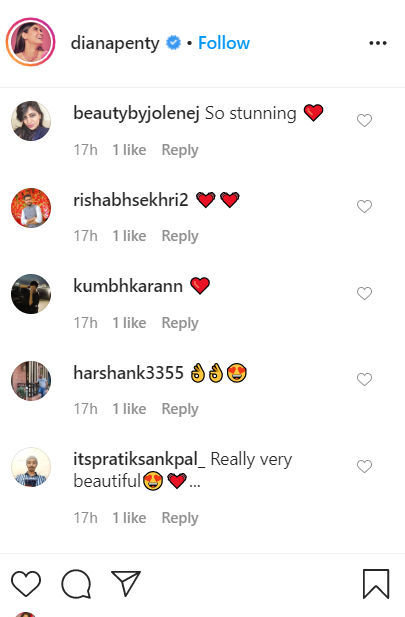 The actor will next be seen in Dinesh Vijan's Shiddat alongside Sunny Kaushal, Radhika Madan, Mohit Raina in pivotal roles. The film, Shiddat is penned by Shridhar Raghavan and Dheeraj Rattan and bankrolled by Dinesh Vijan and Bhushan Kumar under their banner T-Series and Maddock Films. The film is touted to release in 2020.

In a recent media interaction, Dinesh Vijan, the producer of the film, revealed that Shiddat is not an ordinary love story, but also portrays the length to which one can go for it. He also added that the film speaks volumes about the passion that overcomes all dangers and beliefs. He concluded, that the belief in one’s heart and the drive to do certain things is what the film is all about.

Also read | Diana Penty Says 21-day Lockdown Will Pass In A Blink,quips 'keep Blinking If You Have To'