Bollywood's very own and self-proclaimed fashion watchdog Diet Sabya has time and again called out different actors for their choice of fashion and personal style. in the past, this Instagrammer has pointed out fashion faux pas and also blatantly called out 'inspired' and 'gandi copies' of some of Bollywood celebrities. The account does not even spare the designers who make these expensive dresses for high profile Bollywood celebs.

The latest one on Diet Sabya's radar is the Pati Patni Aur Woh actor Ananya Panday who recently made headlines for her win at the 65th Filmfare Awards this year. The 21-year-old actor wore an exquisite bright yellow coloured gown with a black top made by a Paris based couturier Dylan Parienty. A similar design had been worn by Deepika Padukone for an acclaimed film festival in the city earlier last year. Diet Sabya called out Ananya Panday for copying Deepika's style for her Filmfare Award night.

The fashion watchdog asked his followers whether they think that Ananya's dress is a bad copy or is inspired by Deepika's gown. The account also asked netizens to vote for who carried off the look better in the haute couture gown. Diet Sabya's opinion was seconded by Indian model and fashion designer Diandra Soares who commented on the comparison between the two Bollywood actors. 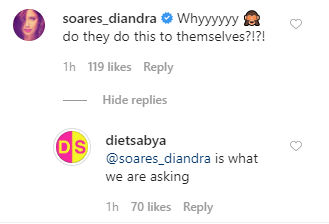 Ananya-Deepika to star in a Dharma Productions love story

Both Ananya Panday and Deepika Padukone will be seen sharing screen space for the first time in a unique love story along with Gully Boy actor Siddhant Chaturvedi. The yet-untitled movie will be produced by Dharma Productions and helmed by Kapoor & Sons fame director Shakun Batra. The tone of the film is reportedly unlike the previous love stories produced under the banner and will have darker undertones to the characters.