Dostana 2 to Go Goa Gone 2: Check out this list of Bollywood sequels that are slotted to be released in the year 2021, the list also includes Badhaai Do & more. 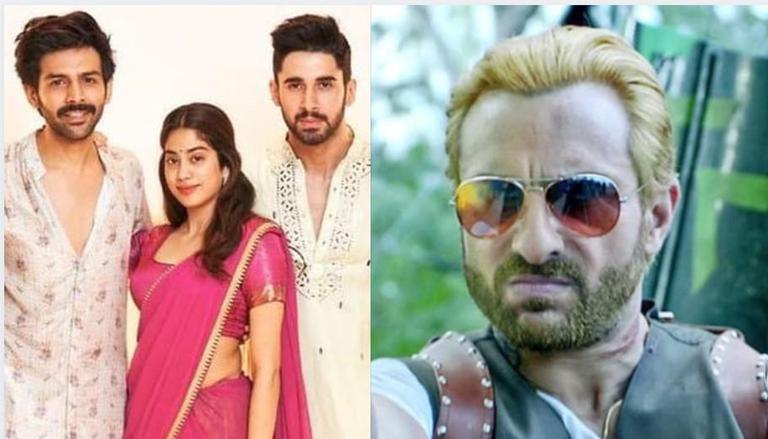 From Dostana 2 to Go Goa Gone 2, here is the list of sequels that Bollywood fans await this year. If you loved the Bollywood originals like Dostana, Badhaai Ho, Satyameva Jayate, Go Goa Gone, you'll love these sequels slotted for the 2021 release. While Dostana 2 features Kartik Aaryan in the leads, on the other hand, Go Goa Gone features Saif Ali Khan, Kunal Khemmu in the lead roles. Take a look at the complete list.

ALSO READ| The Bachelorette Star Clare Crawley And Fiancé Dale Moss Knew Each Other Before The Show?

Janhvi Kapoor, Kartik Aaryan, and debutant Laksh Lalwani have started preparing for their roles for Dharma Productions' next, Dostana 2. The movie is reported to be the sequel to the 2008 hit movie, Dostana. The film is directed by debutant Collin D'Cunha. Reportedly, the director-producer of the film will also introduce a new face in the film, named Fateh Randhawa. The newbie is the grandson of Dara Singh and son of Vindu Dara Singh. The first film in the franchise, titled Dostana, was directed by Tarun Mansukhani. The movie, starred Priyanka Chopra, John Abraham and Abhishek Bachchan in the lead was one of the highest box office grossers that year.

The upcoming movie Badhaai Do cast includes Rajkummar Rao in the lead alongside Bhumi Pednekar, while the rest of the Badhaai Do cast of the film has not been announced as of yet. The movie is directed by Harshvardhan Kulkarni and is set to release soon. While Rajkummar Rao plays the role of a cop in the second installment, Pednekar will be seen playing a PT teacher in the Harshavardhan Kulkarni directorial. Recently, Bhumi Pednekar's Instagram updates on the New Years mentioned that the cast and crew are headed to Dehradun to begin the shooting of the much-awaited film on January 1. The 2018 film starred Neena Gupta, Gajraj Rao, and Ayushmann Khurrana in the lead, while Badhaai Do features Bhumi Pednekar and Rajkummar Rao in the leads.

ALSO READ| Clare Crawley Is Dating Dale Moss? Find Out If She Has Quit 'The Bachelorette 2020'

John Abraham, Divya Khosla Kumar along with director Milap Zaveri began shooting of their next film Satyamev Jayate 2 in Lucknow. Produced by Bhushan Kumar, Krishan Kumar (from T-Series), the cast of the film features Monisha Advani, Madhu Bhojwani and Nikkhil Advani (from Emmay Entertainment), Satyameva Jayate 2 is slated to release on May 12, 2021. Satyameva Jayate 2 release coincides with Eid 2021 and will reportedly see a box-office clash with Salman Khan's film too.

Go Goa Gone 2 release is slated for March 2021 release. The first installment of Go Goa Gone includes Saif Ali Khan, Vir Das, Anand Tiwari along with Kunal Kemmu. The official announcement about the further cast details is yet to be unveiled. The producer Dinesh Vijan had mentioned that the story of Go Goa Gone 2 will centre around the concept of aliens, unlike its predecessor which was a comedy flick about zombies. The producer further added that the zombie element won't be there in the sequel.