Farah Khan and Rani Mukherji have been friends for many years now. While Rani has appeared in Farah’s films for limited scenes, the two are yet to work alongside each other as a lead actor and director respectively. However, the two popular film personalities have been friends for a long time, which is visible in the recent Instagram story that Farah Khan had posted. It is a rather old picture of the two of them at an event, which was earlier unseen. Have a look at the throwback picture.

Farah Khan is known to be quite active on social media, specifically on Instagram. She frequently shares throwback pictures of herself, along with the pictures which also feature other famous celebrities from the film industry. The director had posted another such picture which features veteran actor Rani Mukherji. The photo is visibly quite old, with both the celebrities looking way younger. The picture is likely from an event that they had attended, where one could see that they were shaking a leg with each other. 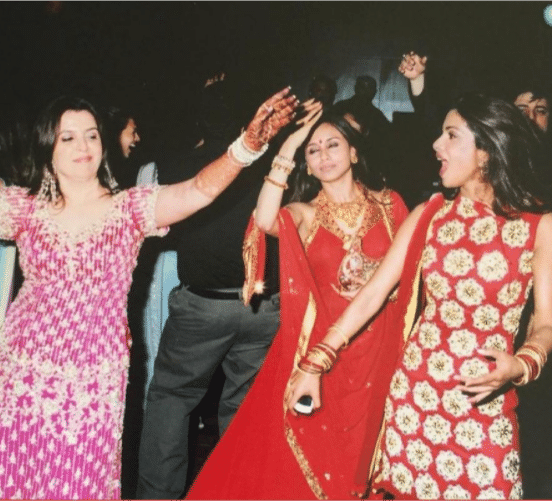 Both Rani and Farah can be seen sporting traditional outfits, as they enjoy their dance side by side. While Farah Khan is seen wearing a pink dress, Rani had sported a red dress that matched with her fine jewellery. This happens to be one of the rare and older photos that the two celebrities have with each other. They have been professionally related since the time Kuch Kuch Hota Hai was made. Farah Khan had made a short appearance in the film in one of the scenes.

ALSO READ: Farah Khan Supports The 'sight Saving' Cause; Shares A New Picture With Her Kids

Farah Khan eventually went on to direct a number of hit films in her professional career, including Main Hoon Na, Happy New Year and others. Rani Mukherji, on the other hand, starred in several films that earned a lot of appraisal from the audience as well as the critics, including Saathiya, Black, Bunty Aur Babli and many others. Rani had also made an appearance in Farah’s film Om Shanti Om.