Farah Khan Kunder seems to be getting more creative by the day as she has been resorting to several lockdown activities. She has been engaging with her fans, her kids and doing everything fun during the quarantine period. Farah Kunder made another fun interview video with her kids. The video includes her kids Anya Kunder, Diva Kunder and Czar Kunder.

Farah Kunder starts the fun video by saying, “Hello everyone I am Farah Khan and during this lockdown thought it would great if I have some fun with my kids and have a fun session regarding my bachpan(childhood). So let’s starts bachfun with my kids". The first question was by Anya and she went on to ask, “Did you like puppies when you were small?” Farah answers by saying that, “I was not fond of puppies but I love them now because you love puppies and you are doing so much for the puppies.” Next up was her son Czar, he asks, “Did you love rap songs?” and Farah answers, “My favourite rap song was Rail Gadi, Rail Gadi.” The last one to ask a fun question was Diva, she asks Farah, “Were you good at maths when you were a student?” Farah Kunder clearly lies by saying, “Yes! I was too good at maths; I was mind-blowing!” Divya cross-questions her mom by asking, “What is 37*2?” and Farah did not know the answer. That is how the fun video ended.

Watch the video shared by Farah Khan on her social media

Farah Khan shared the video on her Instagram. She also wrote the caption, “BachFun ke din. Tables have turned. My lovely kids are interviewing me! And looks like they are quite embarrassed by answers. Here's a snippet of our #BachFUNMoment and all our masti! #NonStopBachFUN #BachFUNMoment #BeCalmBeEntertained.” Several fans of the director were all laughter emoticons in the comment section. 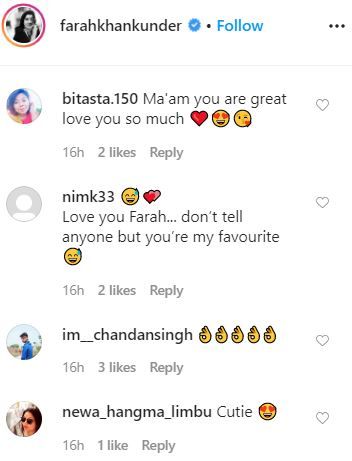 Farah Khan Kunder is having fun with her kids even during the lockdown which has been imposed for almost two months now. Farah Khan shares videos of activities with her kids. The mother of three and the director knows how to bring the witty out of her kids. Here are some pictures of Farah’s Instagram.

Also Read | 'Who Gives Rs 1 Lakh For A Sketch?', Asks Farah Khan As She Thanks Abhishek Bachchan

PEOPLE HAVE PLEDGED SO FAR
LATEST NEWS
View all
8 hours ago
Riteish deshmukh thanks lata mangeshkar, says 'my father had great respect for you'
5 hours ago
Ileana d'cruz shows how she is 'avoiding people' with a stunning underwater picture
6 hours ago
Siddhant chaturvedi's reply to a comment on his instagram post wins the internet
7 hours ago
Watch shibani dandekar and farhan akhtar recreate lady gaga & bradley cooper's 'shallow'
7 hours ago
Amrita singh is singing 'tum aa gaye ho' for saif ali khan in this viral video; see here