After completing their shopping amid COVID-19 lockdown, Shibani Dandekar and Farhan Akhtar stopped by Anusha Danker's residence to deliver her some treats

Bollywood actor Farhan Akhtar and girlfriend Shibani Dandekar stepped out in the city to buy groceries on Sunday. The couple was spotted in Mumbai buying essentials when they were clicked by the paparazzi amid Coronavirus lockdown. Infact, Farhan Akhtar also delivered some treats for Shibani's sister- Anusha Dandekar, who lives alone. The couple's kind gesture has really made Anusha Dandekar happy.

After Farhan Akhtar and Shibani Dandekar got done with their shopping, the couple went to Anusha Dandekar's residence to deliver her some treats as the latter lives alone. Sharing a glimpse of the same, Anusha Dandekar said, "Omg this was me getting treats from my sister who was dropping them from the car because I'm alone and she wanted to give me some love. Love you chicken and F -- Shibani Dandekar and Farhan Akhtar- Thank you". 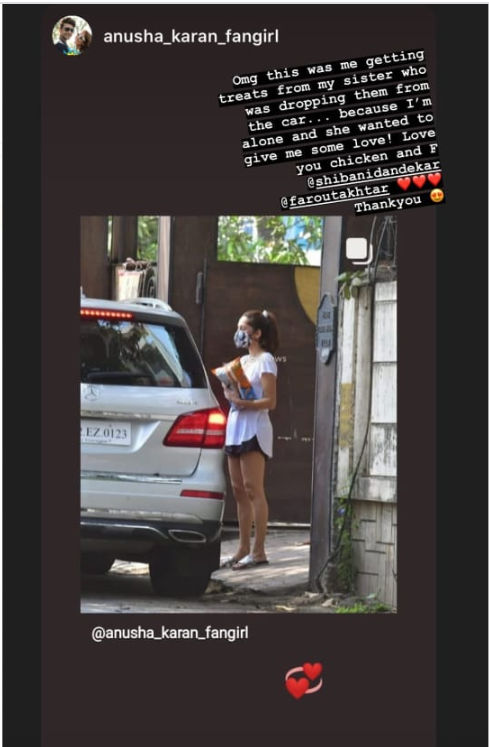 Meanwhile, the adorable couple is spending somequality time with each other amid Coronavirus lockdown. Both Shibani Dandekar and Farhan Akhtar are showcasing their culinary skills by baking healthy cookies. Not to miss the Rock On actor's music video that stole the show. Farhan, in the video, is seen crooning a single from his album Echoes. His mesmerising voice left Hrithik Roshan, Zoya Akhtar and Arjun Rampal in awe of his talent.

Anusha Dandekar, on the other hand, is sharing updates of her indoor whereabouts with fans. Not only this, but the actor also shares some throwback pictures, recalling her good old days. On Sunday night, MTV’s Love School's host shared a pic of herself with a motivating caption. Anusha says, "Girls if I have learnt anything... it’s to love yourself so completely that any other kind of love is just a bonus". Check out Anusha Dandekar's photo here.

Girls, if I have learnt anything... it’s to love yourself so completely that any other kind of love is just a bonus... Anusha â¤ï¸

PEOPLE HAVE PLEDGED SO FAR
LATEST NEWS
View all
21 mins ago
Taapsee pannu remembers how shoot life was before covid-19 with a 'game over' bts pic
2 hours ago
Resumption of film shooting: fwice writes to cm thackeray, lists precautionary guidelines
14 mins ago
Ranveer singh shares how covid pandemic has affected him mentally, calls it 'devastating'
1 hour ago
Maha cm uddhav discusses protocols with tv producers, filmmakers keen to resume shoot
29 mins ago
Sanjay gupta asks for rights of film on sonu sood with akshay as lead, see sonu's reaction