Find Out Which Is Vicky Kaushal’s Favourite Movie Of All Time Here!

Vicky Kaushal did a question and answer round with his fans on Instagram. He replied to a question on his favourite movies so far. Find out the answer here.

Vicky Kaushal’s quarantine spare time resulted in an 'Ask me anything' session with fans. Many fans poured in questions regarding life and other details of the actor. One by one the actor made it a point that he answers them all. One interesting question he was asked was about his favourite films of all time.

Also Read | Curious About How Vicky Kaushal Spends His Time During Quarantine? Here Is The Answer

Also Read | Vicky Kaushal Donates â‚¹ 1 Crore To Coronavirus Funds, Says 'we're All In This Together' 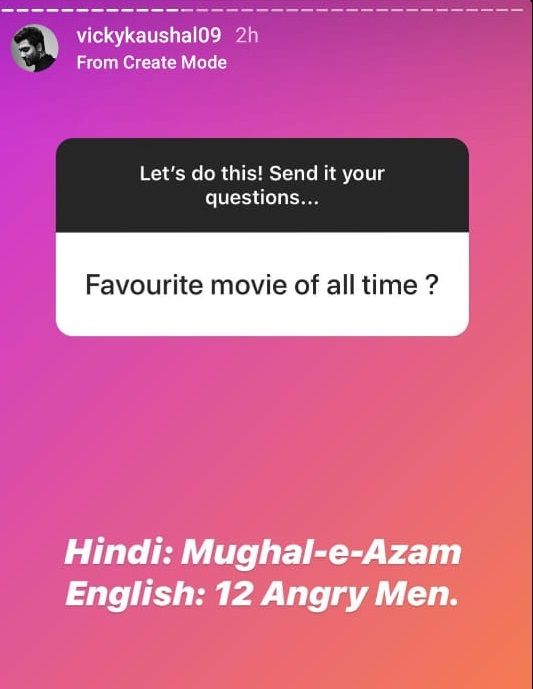 Vicky Kaushal was last seen in the film Bhoot: The Haunted Ship, part one of the three-part series bankrolled by Dharma Productions. Next, he will be seen in a biographical drama in and as Udham Singh in a Shoojit Sircar directorial. Furthermore, he will be essaying the role of Major Manekshaw in the film Sam. All of the projects are on hold due to the COVID-19 lockdown.

PEOPLE HAVE PLEDGED SO FAR
LATEST NEWS
View all
1 hour ago
Bhumi-konkana's 'dolly kitty aur woh chamakte sitare' to release on ott?
57 mins ago
Pooja hegde fumes at instagram hackers: 'hope you haven't given out personal information'
22 mins ago
Sushmita sen explains how stability is vital for relationship with a workout video
1 hour ago
Viineet kumar talks about 'betaal'; says 'when you experiment, backlash is expected'
1 hour ago
Salman khan wants ‘younger generation’ to listen to 'bhai bhai' song again & again