Recently, Vicky Kaushal hosted a 'Ask Me Anything' session. A user asked him about his first Bollywood crush, and his answer can be relatable to most of us.

To kill the time during the current nationwide lockdown for 21 days, many Bollywood celebrities are indulging in different fun activities. From home workout to doing chores, the latest posts of the stars are giving an insight to fans into their quarantine. Apart from posts, they are also interacting with fans through social media. Recently, heartthrob Vicky Kaushal also hosted a 'Ask Me Anything' session on Instagram and revealed his first crush.

Interestingly, many of his fans asked him various questions related to his personal and professional front. Amid the session, a fan asked him,  'Who was your first crush in Bollywood?'. While giving an answer to the question, Vicky Kaushal shared a picture in which he was sharing the frame with his first Bollywood crush.

It was none other than Dhak Dhak girl, Madhuri Dixit. The Uri actor shared an old picture of him with Madhuri Dixit when he visited a dance reality show to promote one of his films. Vicky is seen sporting a casual look in an orange hoodie, while Madhuri Dixit looks stunning in a green outfit.

Take a look below: 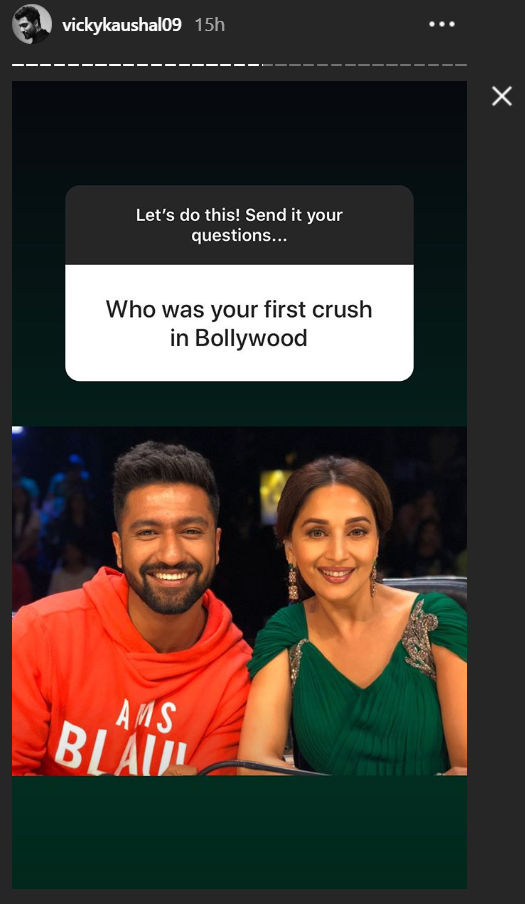 Talking about his professional front, the 31-year-old actor was last seen in Karan Johar's horror film, Bhoot Part One: The Haunted Ship. The Bhanu Pratap Singh directorial received a lukewarm response at the box-office. Kaushal has numerous projects in his kitty including, Udhaam Singh. The biopic-drama is slated to hit the theatres on August 15, 2020.

Apart from this, he will also essay a lead in Karan Johar's upcoming multi-starrer Takht. The period-drama will also feature Kareena Kapoor Khan, Alia Bhatt, Bhumi Pednekar, Janhvi Kapoor, Anil Kapoor and Ranveer Singh in the lead. The film is expected to release in December 2021.

READ | Vicky Kaushal Has Had A Great Career So Far, Take A Look At The Actor's Career Graph