Call it a coincidence or not, just a day before the premiere of Four More Shots Please! The second season, a new quartet started being associated with the web series instead of Kirti Kulhari, Sayani Gupta, Maanvi Gagroo and Bani J. Kareena Kapoor Khan posting a snap with her ‘girl gang’ including her sister Karisma Kapoor and the Arora sisters-Malaika and Amrita, made netizens believe that they could also look perfect like the four friends on the show, while Kareena quipped about ‘season 3’ involving them. There were interesting reactions from celebrities as the new poster went viral.

Malaika Arora had an interesting take on the poster, and quipped that she was totally ready for it, but had only one condition, that an ‘exotic location’ is a part of the deal. Rumoured beau Arjun Kapoor reacted that he was ‘strutting to the TV’, probably out of pride to see Malaika in a show like this.

Meanwhile, the original stars also reacted to Kapoor-Aroras version of Four More Shots Please!, Sayani Gupta wished the two quartets could meet at an exotic location. She also termed the Kapoor-Arora sisters as the ‘OG Galpals’. Bani J tagged the makers Amazon Prime and hoped that the collaboration happens for sure, at least for special appearances. 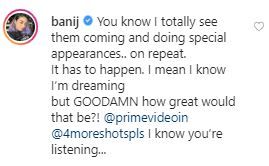 Four More Shots Please! first season, directed by Anu Menon, had aired in January 2019, and the second season has been directed by Nupur Asthana. The series traces the friendship of Damini, Umang, Anjana and Siddhi amid their respective personal and professional lives and relationships.

PEOPLE HAVE PLEDGED SO FAR
LATEST NEWS
View all
43 mins ago
Disha Patani reminisces 'Malang' days with a stunning throwback picture
35 mins ago
Abhay Deol's astounding net worth will make you wonder 'What are the Odds?'
25 mins ago
Parineeti Chopra shares her mother's beautiful paintings & artwork amid lockdown; See pics
25 mins ago
Did you know Wily Frenzy aka Yash Nagar is CarryMinati's elder brother?
1 hour ago
Anupam Kher reveals he was suffering from facial paralysis while doing Hum Aapke Hain Koun