Hansal Mehta Updates His Fans On Phone Stalker Incident; Says 'matter Is Being Dealt With'

Hansal Mehta's latest tweet updates fans on his phone stalker harassment incident. He says that the matter is being dealt with. Have a look at all the details.

On January 10, 2021, filmmaker Hansal Mehta, who was recently distressed after being harassed on a phone call by an unknown caller, took to his official Twitter handle to inform his fans that ‘the matter is being dealt with’. The filmmaker claimed that an unknown caller was harassing him and his family at night. He immediately took to his microblogging site and shared the number of the caller with the Mumbai Police by tagging them in his tweet.

Hansal Mehta updates his fans about his 'harassment' matter

The harassment by an unknown caller last night is being dealt with and hence I have deleted my earlier tweet. Thank you for all the support.

He wrote, “Dear @MumbaiPolice this unknown person showing up as Rohit on truecaller has been harassing incessantly all of last night. Please reprimand the person and take suitable action. His number is +918291096554”. Mumbai police responded to his tweet by asking him to lodge a complaint at his nearest police station. Further, they said that they can only begin their investigation once the filmmaker officially lodges the complaint.

Also read: Rajkummar Rao Thankful For The Year 2020; Shares Collage Of His Characters Across 2020 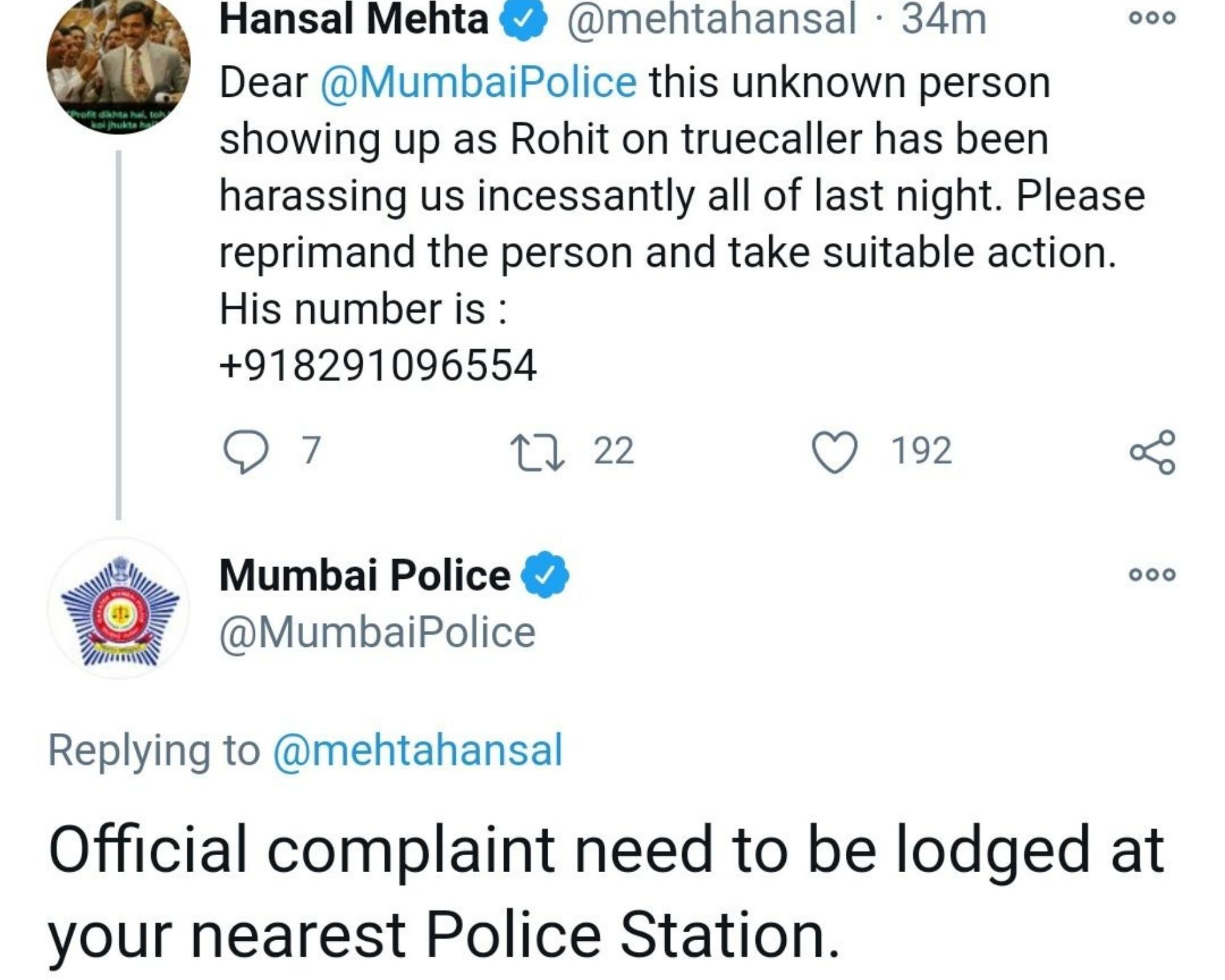 A user suggested that the filmmaker could simply block the contact and move ahead. Hansal replied to the user’s tweet, “He needs to be reprimanded. Nobody shows off when harassed. My family is distressed by this person’s behaviour”. According to Yahoo! Style, Hansal claimed that the harasser called on his wife’s number repeatedly. He continued that they could switch off the phone but thought that it was never the solution. He concluded that they need to confront such harassment ‘headlong’ and ‘not push it out of their attention’.

Also read: Hansal Mehta Reveals Why He Could Relate To Harshad Mehta's Story In 'Scam 1992'

He needs to be reprimanded. Nobody shows off when harassed. My family is distressed by this person's behavior. https://t.co/SQALXDES5d

Many of his fans reacted to the matter and took to their Twitter handle to express their anger. While many of them extended their support and praised him for speaking up, several netizens also criticised him for showing off. Have a look at the reactions below.

Respect âœŠ but police needs to understand the seriousness of the complain.

Such numbers should be made public & should be taken to task..

We are really living in tough times..the society itself has become so polaried...my political views do not match with my family and some of my friends...hence the rift..i dont know what will happen in next decade...biden is the only good news we had in 2020.

When you delete, take back an opinion, THEY WIN Mehta saab!

Ok. As you wish , tagging @FBI for further investigation ðŸ˜†.

R u abnormal or trying to get attention?

On the work front, Hansal is known for his films such as Dil Pe Mat Le Yaar, City Lights, Aligarh, Simran, Omerta. His latest release Chhalaang, which emerged as a critical success, was produced by Ajay Devgan, Luv Ranjan, Ankur Garg. It featured Rajkummar Rao, Nushrratt Bharuccha and Mohammed Zeeshan Ayyub in the lead roles. His another release Scam 1992: The Harshad Mehta Story also received an appreciation for the characterization and the storyline. The Amazon Prime Video web series featured Pratik Gandhi, Shreya Dhanwanthary, Hemant Kher and Nikhil Dwivedi in the essential roles.