Bollywood stars enjoyed Holi with fanfare. As Varun Dhawan and Natasha Dalal attended celebrations together, fans could not get enough of the couple.

As is the case with Diwali, Eid and Christmas celebrations, celebrities from the film industry are known to host parties for Holi as well.  Stars are often seen party-hopping when they are invited to multiple parties at the same time. One of the hosts for the festival of colours celebrated on Tuesday was Arti Shetty, producer and sister-in-law of Congress leader Milind Deora.

READ: WATCH: Varun Dhawan Calls A Cop On A Paparazzi, Here's What Happened Next

One of the star attractions at the party was Varun Dhawan-Natasha Dalal. The couple, who were known to avoid public appearances during the initial years of Varun's career, have become more open to arrive together at events, amid wedding rumours.

Varun, dressed in a ‘Made in India’ T-shirt and jeans, was seen with colours all over him, as he posed for selfies with fans, while Natasha wore a sleeveless top and shorts.

Though the duo was not clicked together per se, the two of them being at the same venue was enough for fans to go gaga. Some addressed them as ‘bhaiyaa-bhabhi’, another fan did not hesitate before asking Varun to marry her and stating that Natasha was very ‘lucky’ to have Varun. Be it posting comments like ‘Hayeee’, ‘OMG’ or posting heart emojis, Varun-Natasha fans could not get enough of the two.

READ: Anushka Sharma's Funny Pictures With Varun Dhawan That You Must Check Out; See Here 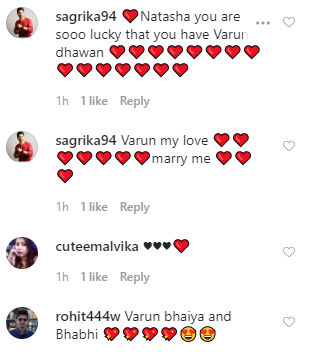 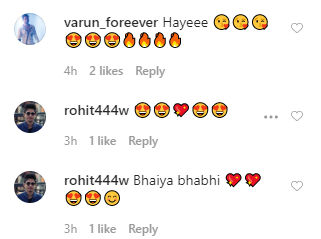 Last month, rumours of the couple’s ‘roka’ ceremony had made headlines. However, the Student of the Year star had termed it ‘false news’ and clarified that they were together only for a birthday party.

Meanwhile, on the professional front, Varun Dhawan’s last two films have not lived up to expectations. While Kalank was a debacle, Street Dancer 3D was an average grosser. All eyes are now on the Coolie No 1 remake, where he reunites with his father David Dhawan.

READ: Varun Dhawan Has A Gala Time With Bhuvan Bam In His Latest YouTube Interview