Hrithik Roshan recently could not stop praising ex-wife Sussanne Khan's latest post on social media. Susanne took to her social media to share an insightful picture wherein she can be seen sitting on a chair in front of the statue of a man with the face of an eagle. The picture had her side face visible wherein she can be seen donning a dark blue coloured blazer and purple pants along with shoulder-length hairdo.

She captioned the picture with the lyrics of the Orchestral Manoevoures in the Dark's track If You Leave. Sussanne wrote in the caption stating, 'If you leave I won’t cry... I won’t waste a single day.' She used the hashtags of #NeverLookBack and #Eagle'sNestWarm.

Hrithik was quick to react stating, 'Super pic'. While Sussanne's sister, Farah Khan Ali also reacted stating, 'Love It Suss.' Take a look at the picture shared by Sussanne and the reactions of Hrithik and Farah to the same. 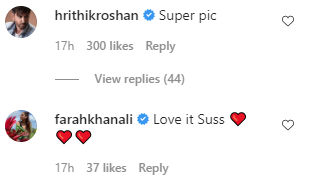 Currently, Hrithik and Sussanne are spending the lockdown together for co-parenting their sons, Hredhaan and Hrehaan. Sussanne has also been part of the recently held Ganpati celebrations in Hrithik's home along with his father, Rakesh Roshan's birthday. Sussanne recently had also taken to Instagram to share some insight from a motivational book that she has been reading lately. She posted a picture of the cover page of the book titled Think Like a Monk by Jay Shetty.

She also went up to put up a picture of the ‘Spot Stop Swap’ system which is used to fix an ultimate issue in life. Sussanne spoke in the caption for the post about the concept of Mudita, in the words of Jay Shetty. She also mentioned that Mudita is the concept of experiencing selfless joy in the success of others. The book tends to speak about how there is always some room for happiness as it comes with no limit.

She also added that according to the book, the monks believe there is always a seat for everyone when it comes to happiness and joy. Through the caption, Sussanne also thanked Jay Shetty for his wise, insightful words as she believes in every bit of it. Have a look at the post on Sussanne Khan’s Instagram here.