Hrithik Roshan has a special message for Irrfan Khan as he unveiled the first poster of 'Angrezi Medium' with a special heartwarming video. Read below-

The makers of Angrezi Medium are all set to release the sequel of the Irrfan Khan starrer. After keeping fans waiting, the first look poster of the film along with a special message from Khan was unveiled. Hrithik Roshan who watched the special video found it 'heartwarming'. In the clip, apart from several stills of the much-anticipated film, Khan can be seen giving a health update to the audience. Sharing it on Twitter, the Super 30 actor stated that the film is 'very very special', and that he is waiting for Khan to be back in Mumbai soon. Read below-

This is so heartwarming . Irfan , my love and prayers are with you . U are amazing. And this one looks like a very very special film . Waiting for it . And like you said, waiting for you 🤗 https://t.co/q7xYjJuwBg

The video has BTS pictures of Irrfan Khan, Kareena Kapoor Khan and Radhika Madan along with their entire team, having fun while shooting for the film. The video also has Irrfan saying that he is away getting treated for his cancer in the US and wished that the could be here at this time to promote the film. However, he asks all his fans to wait for him, nonetheless. 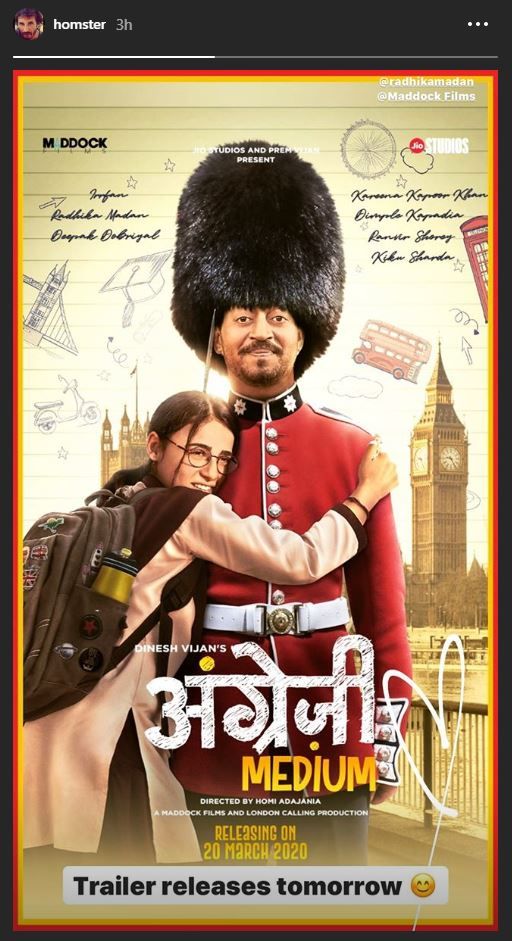 The first look poster of Angrezi Medium showcases Irrfan Khan dressed as a royal guard and Radhika Madan hugging Irrfan Khan in a simple avatar as she wears a brown colored salwar kameez with a school bag on her shoulder. The background gives a ruled page effect where Bigg Ben and a few places in London can be seen.

READ: Irrfan Khan's Upcoming Movies That Are Highly Anticipated Due To The Actor's Return