Irrfan Khan's son Babil Khan took to his Instagram story to share a glimpse of his father's mural on Mumbai's Bandra street. See the picture here

Bollywood and Hollywood actor Irrfan Khan passed away last week on April 29, at the age of 53. He is survived by his wife Sutapa and two sons Babil and Ayaan. His sudden demise comes as shocking news for his fans and everyone in the entertainment industry. Even though the actor is no more, his legacy is certainly living on. Recently, two Mumbai artists took to their art to give Irrfan Khan a heartfelt tribute. The artists painted Irrfan Khan’s mural. Irrfan Khan’s son Babil Khan took to his Instagram story to share a glimpse of the artwork. 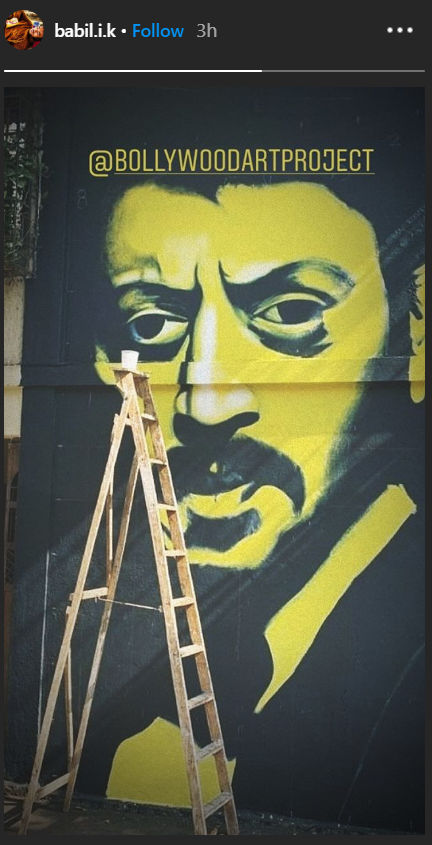 According to a media report, the mural’s location in Bandra is also very close to Irrfan Khan’s 2013 movie The Lunchbox. Irrfan Khan was last seen in the movie Angrezi Medium. He was away from the promotions of Angrezi Medium due to his health concerns. The movie released in March 2020 and received positive reviews from fans and critics alike.

Also Read | Irrfan Khan's Son Babil Thanks People For Their Condolences, Says 'My Vocabulary Is Dizzy'

Irrfan Khan breathed his last in Mumbai’s Kokilaben Hospital. He was admitted a day before his demise. The nationwide lockdown made it difficult for Bollywood celebrities and his fans to attend his funeral. Irrfan Khan had recently lost his mother too and the actor could not attend his mother’s funeral because of the lockdown. A lot of Bollywood celebrities like Amitabh Bachchan, Salman Khan, Aamir Khan, Deepika Padukone, Ranveer Singh, Anushka Sharma, Alia Bhatt, etc. took to their social media to share their feelings on Irrfan Khan’s sudden demise.

PEOPLE HAVE PLEDGED SO FAR
LATEST NEWS
View all
8 mins ago
Kareena kapoor’s these hilarious memes are super relatable during lockdown
1 hour ago
Bhumi-konkana's 'dolly kitty aur woh chamakte sitare' to release on ott?
42 mins ago
Riddhima kapoor sahni shares throwback pics of ‘good times’ with rishi kapoor
22 mins ago
Arjun kapoor collaborates with be younick, a mahabharat 'yuddh' is on the cards
1 hour ago
Pooja hegde fumes at instagram hackers: 'hope you haven't given out personal information'