Irrfan Khan's Son Babil Thanks People For Their Condolences, Says 'My Vocabulary Is Dizzy'

Irrfan Khan's death news came Tuesday as he lost the battle with cancer. His son wrote a heartfelt note thanking people for their well wishes

Actor Irrfan Khan breathed his last on Tuesday owing to a colon infection. Irrfan Khan is survived by his wife and two sons, Babil and Ayan. The whole world mourned the loss of the actor and paid heartfelt tributes. Recently, Babil took to his social media handle and wrote a heartfelt message for all his well-wishers.

Babil on his Instagram story wrote that he was deeply grateful for all the condolences everyone has sent to him and his family. He further wrote that right now, he is at a loss of words and would get back to each one, but just not at the moment. Check out the post below. 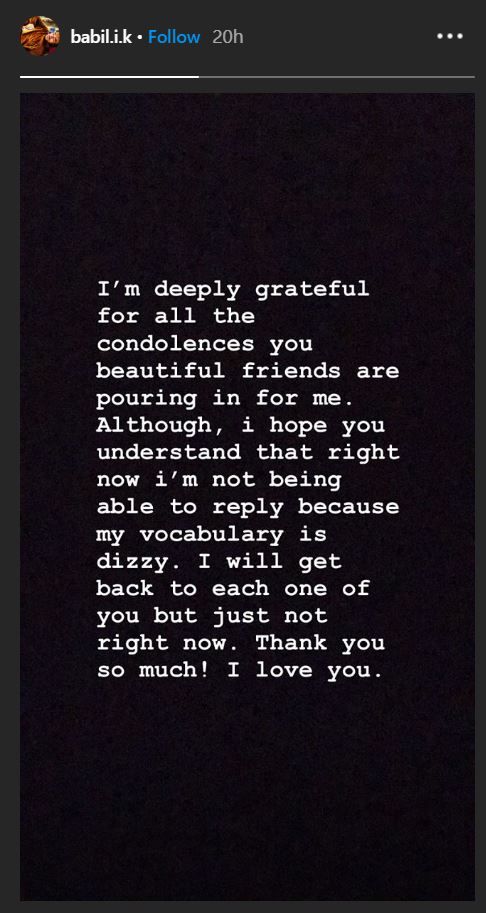 A spokesperson of actor Irrfan Khan confirmed the news of his death and issued a statement. Here is what it said.

“I trust, I have surrendered”; These were the some of the many words that Irrfan expressed in a heart felt note he wrote in 2018 opening up about his fight with cancer. And a man of few words and an actor of silent expressions with his deep eyes and  his memorable actions on screen. It’s saddening that this day, we have to bring forward the news of him passing away. Irrfan was a strong soul, someone who fought till the very end and always inspired everyone who came close to him. After having been struck by lightning in 2018 with the news of a rare cancer, he took life soon after as it came and he fought the many battles that came with it. Surrounded by his love, his family for whom he most cared about, he left for heaven abode, leaving behind truly a legacy of his own. We all pray and hope that he is at peace. And to resonate and part with his words he had said, “As if I was tasting life for the first time, the magical side of it”.

Read | Did You Know Budding Actors Gave Irrfan Khan's Phone Number As A Reference To Directors?

PEOPLE HAVE PLEDGED SO FAR
LATEST NEWS
View all
4 hours ago
Raveena Tandon wishes her parents on 54th wedding anniversary, shares throwback pics
2 hours ago
Sonu Sood to Dimple Kapadia's first cook for Twinkle, here are the day's top stories
4 hours ago
Maanvi Gagroo receives apology from the fashion brand that used her pic & body shamed her
5 hours ago
Amitabh Bachchan's on-the-spot invention is 'YOGEN'; here's what it means
3 hours ago
Pankaj Kapoor's solid net worth is a result of his illustrious career; Check details here