Kartik Aaryan and Janhvi Kapoor are set to share screen space in the upcoming movie- 'Dostana 2'. Take a look at Janhvi's comment on Kartik's recent post.

Kartik Aaryan is enjoying the limelight in Bollywood as his back-to-back movies are doing incredibly well with the audience. The actor who is only 9 years old in the industry, enjoys a massive fan following ever since his debut with Pyaar Ka Punchnama. After romancing Sara Ali Khan in Love Aaj Kal, the actor is all set to share screen space with Janhvi Kapoor in his next titled Dostana 2. And now, Kapoor’s recent comment on Kartik’s picture has sent fans in a tizzy.

Kartik Aaryan, on Wednesday, took to his Instagram to share a picture of himself showing his fractured hand at an event. While fans in huge numbers shared concern about his hand, Dostana 2 co-star Janhvi Kapoor drops a hilarious comment on Kartik’s picture. She says, ‘Haath Todke Swaagat kar rahe hai aap 🙏🏼’. Take a look. 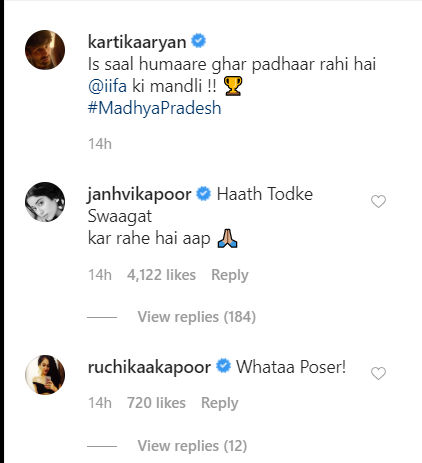 Meanwhile, Kartik Aaryan’s photos from the recent Awards function have gone massively viral. The actor is making headlines as he is seen bonding with Sooryavanshi actor Katrina Kaif now. On March 5, Kartik took to his Instagram to share photos with Katrina, in which the latter can be seen checking up on his hand. Have a look.