Although Janhvi Kapoor follows a strict fitness regimen, she binge eats once in a while. She shared a picture of her eating ice-cream in her car. Read more

Janhvi Kapoor is climbing the stairs of fame and popularity. The Bollywood diva has given major fashion goals to her fans on several occasions. Her sartorial choices have always become the talk of the town. Janhavi Kapoor absolutely knows how to flaunt and nail her outfits be it pastels, neon, florals or ethnic. The actor also doesn’t shy away from showing her foodie side on social media.

Although Janhvi Kapoor follows a strict fitness regime, she binge eats once in a while. Taking to Instagram, Janhvi Kapoor shared a picture of herself on her story. In the picture, she can be seen sitting in her car and hogging ice-cream before hitting the ramp. Janhvi Kapoor is all decked up in a gorgeous ensemble. Her story made all her fans go 'aww'. The picture is a testimony that Janhvi Kapoor is a true blue foodie and fans can't get enough of it. 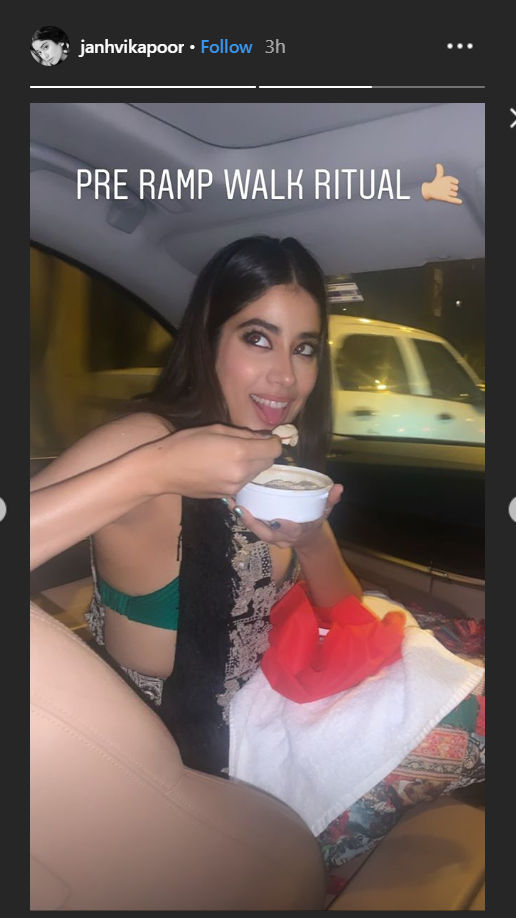 What is next in store for Janhvi Kapoor?

Janhvi Kapoor has plenty of interesting projects lined up. She will be next seen in Roohi Afza, Takht, Kargil Girl and Dostana 2. Roohi Afza is helmed by Hardik Mehta and jointly bankrolled by Dinesh Vijan and Mrighdeep Singh Lamba. Roohi Afza will see Rajkummar Rao and Janhvi Kapoor onscreen for the first time. The plot of the film revolves around a singing ghost who puts grooms to sleep to possess their brides.

Jahnvi Kapoor will also be seen in Karan Johar’s multi starrer Takht. Janhvi Kapoor will further pair up with Kartik Aaryan for Dostana 2. The film will be produced by Karan Johar. The movie is a sequel of the 2008 movie Dostana which starred Abhishek Bachchan, John Abraham and Priyanka Chopra in prominent roles.