Janhvi Kapoor seems to be in love with 'Shayad' from Kartik Aaryan's Love Aaj Kal. The song, sung by Arijit Singh, has made it to the list of her favourites

Bollywood actor Janhvi Kapoor seems to have found a new obsession. The actor, who is reportedly busy shooting for her upcoming movie, Dostana 2, took to Instagram to express her admiration for Love Aaj Kal's new song Shayad. The actor said, "Obsessed with this track." 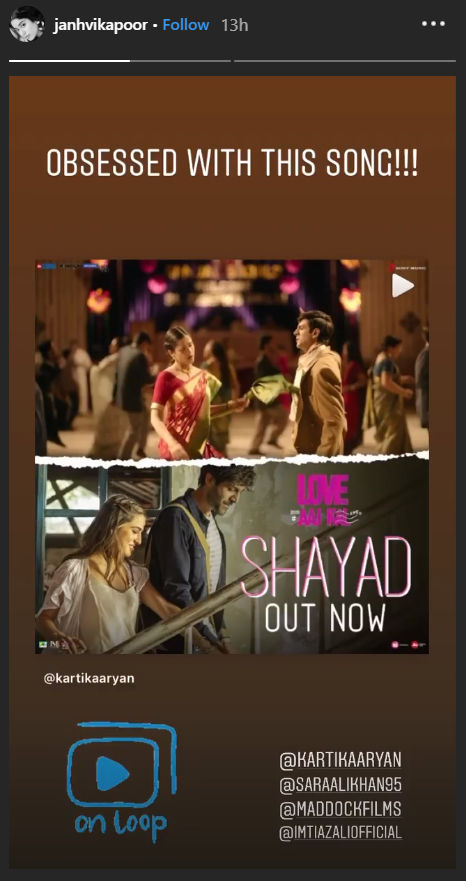 The track composed by Pritam and sung by Arijit Singh has not only caught Janhvi Kapoor's attention but of all music lovers, who are going gaga over the soulful track, especially for the chemistry between the leads, Sara Ali Khan and Kartik Aaryan. The Love Aaj Kal song has clocked in more than 20 million views on Youtube in less than a day.

Here are some of the audience's reaction to Love Aaj Kal's song:

Also Read | Sara Ali Khan-Ibrahim, & Other Sibling Celebs Who Are NOT Splitting Images Of Each Other

Much like Janhvi Kapoor's reaction, the audience also seems to be smitten by the romantic Love Aaj Kal track. Interestingly, many are loving the song more than the trailer of the film. The upcoming movie, starring Sara Ali Khan and Kartik Aaryan in the lead, is the sequel to Imtiaz's 2009 hit movie of the same name. The Imtiaz Ali directorial is slated to hit the marquee on February 14, 2020.

Meanwhile, Janhvi Kapoor is reportedly shooting for Collin D' Cunha's Dostana 2. The movie, starring Janhvi Kapoor and Kartik Aaryan in the lead, will mark the celluloid debut of television actor Lakshya. The comic caper is touted as the sequel to 2008 movie of the same name and will reportedly hit the silver screens in 2020. Besides the sequel, Janhvi also has a slew of movies in her kitty.