Janhvi Kapoor-Kartik Aaryan were spotted together at the airport after their rumoured Goa holiday. Fans asked if they are dating each other.

Are Kartik Aaryan and Janhvi Kapoor the latest couple in tinsel town? That’s the question netizens have been asking after the duo reportedly holidayed together in Goa. The duo, who is working together on Dostana, even did not mind being snapped together at the airport.

READ: As Janhvi Kapoor Buys A Rs 39 Crore House, Take A Look At Her Whopping Net Worth

A picture of Kartik Aaryan and Janhvi Kapoor reportedly from their holiday in Goa is going viral. The actors can be seen twinning in white in the picture, that became a talking point among fans.

No other picture from their holiday surfaced online as they seem to have succeeded in keeping it hush-hush. On Tuesday, they were spotted together at the airport. Janhvi’s sister Khushi was also spotted and seemed to have accompanied them to Goa.

Netizens wondered if they were dating each other. Many assumed that it was indeed the case and expressed their excitement and love. 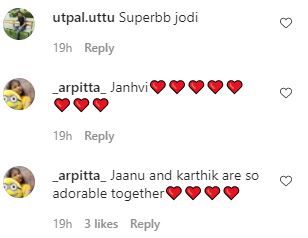 Kartik Aaryan has been frequently linked to his co-stars, with link-ups involving Sara Ali Khan and Ananya Panday making major headlines. Ananya too had made been in the news recently, for her holiday with Khaali Peeli co-star Ishaan Khatter, which is being considered as a ‘confirmation’ on their relationship.

It was in June 2019 that it was announced that Kartik and Janhvi are collaborating on Dostana 2. TV star Lakshya is making his debut in the film to complete the trio of the Priyanka Chopra-Abhishek Bachchan-John Abraham starrer comedy. The movie had been gearing up for release in 2020 but has been pushed due to the COVID-19.

Apart from Dostana 2, Kartik is working on films like Dhamaka and Bhool Bhulaiyaa 2. He had announced Dhamaka on the occasion of his birthday and collaborates with Neerja director Ram Madhvani in the movie.

Janhvi featured in Gunjan Saxena: The Kargil Girl earlier this year. She will be starring in films like Roohi-Afzana and Takht over the next one-two years.

READ:Janhvi Kapoor To Start Shooting For Hindi Adaptation Of 'Kolamaavu Kokila' In Punjab?

READ:Anshula Kapoor Thanks Janhvi, Khushi For Bringing 'the Warm And Fuzzies' On Her Birthday