Janhvi Kapoor To Start Shooting For Hindi Adaptation Of 'Kolamaavu Kokila' In Punjab?

Actress Janhvi Kapoor who is currently holidaying in Goa is all set to begin shooting for her next film Hindi adaptation of the Tamil film, Kolamaavu Kokila.

Actress Janhvi Kapoor who is currently holidaying in Goa is all set to begin shooting for her next film Hindi adaptation of the Tamil film, Kolamaavu Kokila directed by Sidharth Sengupta. According to the reports by Mid-Day, the actress will fly to Punjab and shoot over there in a bio bubble.

Janhvi Kapoor to begin shooting for next in Punjab?

The film helmed by Siddharth Sengupta will go on floors from January 9. A source revealed to the entertainment portal that, Janhvi will fly to Punjab for the film which will be shot over 45 days. The team will roll on January 9, and plan to shoot across various regions. Even though in each location, a different set of restrictions are imposed, strict safety protocol will be maintained. The Hindi adaptation will not be a frame-to-frame adaptation of the original. The original film starred South Indian actress Nayanthara in the lead which will now be reprised by Janhvi. The Dhadak fame actress will be seen essaying the role of a simple North Indian girl from a middle-class family. Her character will be donning minimal makeup and wearing salwar-kurtas and braids. It is also a coming-of-age movie of a girl who gets trapped in an extraordinary situation and saves her family.

Read: Janhvi Kapoor Shares 'weird Arm' Photo Of Herself In A Glamorous Shot

Meanwhile, the actress sparked dating rumors when she was papped at the Mumbai airport on the first day of the year with actor Kartik Aaryan as they left the city. While Kartik flew solo, Janhvi was accompanied by her sister Khushi Kapoor. Their airport arrival left the frenzy fans excited to know about the couple who will soon be seen sharing screen space in the upcoming film Dostana 2. One of the Instagram pages Favela Goa shared a picture of the two stars on their Instagram story where the two can be seen twinning in white for their meal outing. In the picture, Janhvoi and Kartik can be seen posing together for a picture as they enjoy the dine out outside. 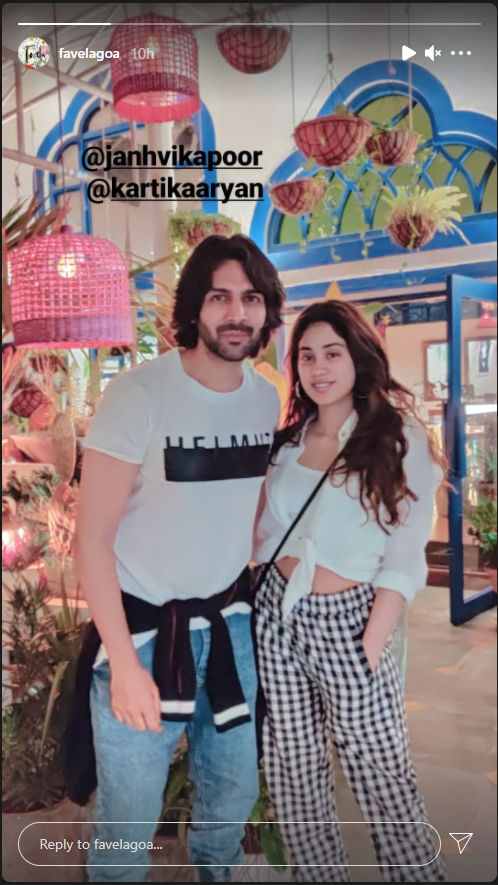