Janhvi Kapoor took to Instagram and shared a series of pictures in traditional attire with candid poses. Check out her social media post:

Bollywood actor Janhvi Kapoor treated her fans and followers with a series of candid photos. She took to social media and shared a carousel post through her official Instagram handle on September 13, 2020, Sunday. It features her in traditional blue attire while candidly posing for the pictures. Here is everything you need to know about Janhvi Kapoor’s recent social media post. Read on:

Bollywood star Janhvi Kapoor took to social media and shared a series of pictures through her official account on September 13, 2020, Sunday. The actor has flaunted her traditional avatar in an ethnic outfit. She has donned a printed blue Kurta and kept her highlighted hair loose in the photo series. Janhvi Kapoor accessorized her dress with a pair of silver Jhumka earrings. For a complete look, she has applied a tiny Bindi and opted for a minimal makeup look with a pink lip colour as the natural light is adding glow to her skin.

The first photo in the carousel post showcases her giving a poker face pose. In the second one, Janhvi Kapoor looks gorgeous laughing at something in a side angle. Similarly, the third candid shot shows the actor smiling gracefully. In the caption accompanying her social media post, Kapoor has dropped two finger-pointing and brown butterflies emoticons. Check out the actor’s recent photos on the photo-sharing platform.

Within a few hours of sharing the Instagram post, Janhvi Kapoor garnered more than 5, 83, 000 likes and over 3770 likes on the photo-sharing platform. Numerous fans, followers, and fellow celebrities of the actor applauded her look in the recent candid shots. Many among them called her beautiful, pretty, and gorgeous through the comment section. On the other hand, various fans and followers expressed themselves with a series of emoticons such as fire, hearts, heart-shaped smileys, roses, blossoms, sparkles, and thumbs up, to name a few. Here are some of the responses to Janhvi Kapoor’s recent photos that you must check out. 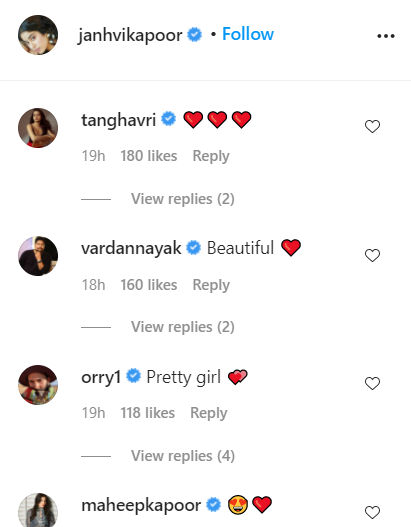