Janhvi Kapoor headed to Tirupati in Andhra Pradesh to offer her prayers to Lord Venkateswara. Driving away Monday blues, the actress shared her first pics.

Janhvi Kapoor headed to Tirupati in Andhra Pradesh to offer prayers to Lord Venkateswara. Driving away Monday blues, the actress's first picture from the location dropped on Monday wherein she had reportedly trekked all the way to the Tirumala town.

And now, sharing another glimpse of her time there, Janhvi shared an album wherein she can be seen striking a pose with an unidentified friend. Clad in an orange and red outfit paired with jhumkaas, the actress can be seen having a swell time. She can be seen sitting on the lawns of what appears to be a hotel, looking extremely happy and relaxed. 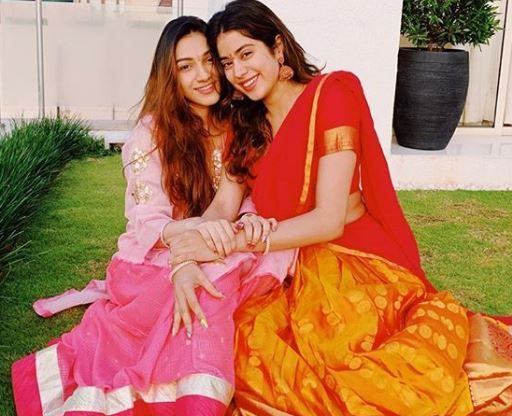 In other pictures and video clips that have appeared online, Janhvi can be seen walking inside the temple complex, accompanied by a woman. In another video, she can be seen walking up the 3,500 steps that lead to Lord Venkateshwara temple in Tirupati. Watch below-

However, this is not the first time the actress has visited the temple. Last year too on the day of Sridevi's death anniversary, she was seen seeking the blessings of Almighty.

On the work front, Janhvi has her hands full with some interesting projects which include, Gunjan Saxena: The Kargil Girl. She will also be seen in the second instalment of Dostana alongside Kartik Aaryan and Lakshya. Apart from this, she is also part of Karan Johar’s magnum opus, Takht. The film boasts of an ensemble star cast which includes Ranveer Singh, Vicky Kaushal, Alia Bhatt, Kareena Kapoor Khan, Bhumi Pednekar, and Anil Kapoor.

PEOPLE HAVE PLEDGED SO FAR
Five times Kareena Kapoor Khan's acting prowess steals the show in 'Good Newwz'; watch
Kartik Aaryan cannot wait to watch his video interview, says "The struggle is real"
Bhumi Pednekar had a 'hidden ambition'; here is all you should know about it
Zaira Wasim thanks BSNL for resolving cellular problem; says 'so very grateful'
Malaika Arora and Alia Bhatt’s adorable laughing picture is what you need to see
DO NOT MISS
COVID: LALU YADAV TO REMAIN IN JAIL
COVID-19: UK BASED DOCTOR ON PPE
TRUMP TEARS INTO CHINA-CENTRIC WHO
DORSEY PLEDGES $1 BILLION
CONG SINGHVI ON COVID-19 LOCKDOWN
PIERS MORGAN: WHO IS RUNNING UK?