Recently, Kartik shared a birthday picture, wishing Janhvi Kapoor on her birthday. Soon after the picture was posted, Janhvi dropped off an unmissable comment

Janhvi Kapoor, who made her debut in Bollywood with Karan Johar’s Dhadak, enjoys a massive fan following thanks to her social media presence and stellar onscreen performance. Recently, the Ghost Stories actor celebrated her 23rd birthday, to mark which fans and celebrities stormed the internet with birthday wishes.

Among the celebrities who wished Janhvi, was actor Kartik Aaryan. Kartik took his social media handle to share birthday post for Janhvi, to which she had an unmissable reaction. Here are the details.

Also Read | Janhvi Kapoor’s Quirky Reaction To Her Own Birthday Cake Will Leave You In Splits; See Pic

Recently, Kartik Aaryan found a unique way to wish his friend Janhvi Kapoor on her birthday. Taking to his official Instagram handle, the actor posted a black and white picture with Janhvi with a note, which comes with a reference to Coronavirus. In the picture, the actors can be seen covering their mouth with hands.

In his caption, Kartik mentioned 'Wash Your Hands campaign', which has started with a motive of preventing the spread of Coronavirus. 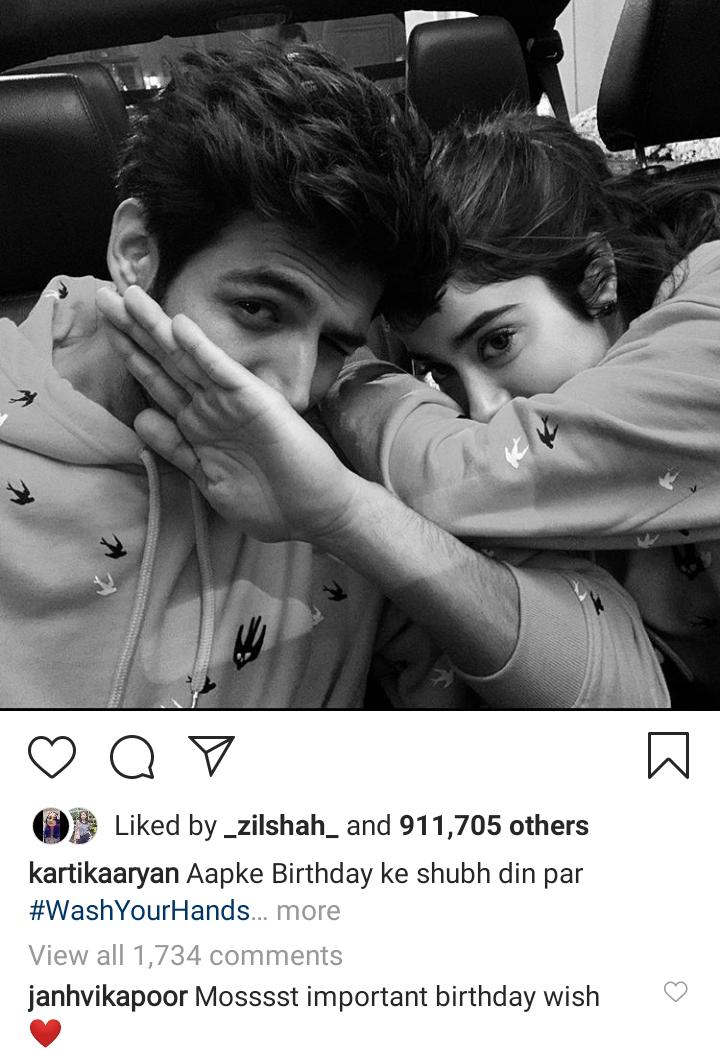 What's next for Janhvi?

Jahnvi has a busy schedule this year as the actor has quite a few releases lined up. The actor will be next seen with Rajkummar Rao in the upcoming horror comedy entertainer, Roohi Afzana, which is helmed by Hardik Mehta. The much-anticipated film also stars Varun Sharma in a prominent role. She also has Gunjan Saxena: The Kargil Girl in her kitty, which follows the life of the Kargil war veteran, Gunjan Saxena.

Also Read | Boney Kapoor Wishes Daughter Janhvi Kapoor: 'You Have Grown Up To Be A Beautiful Person'

The actor is also a part of Karan Johar's Takht, which also stars Ranveer Singh, Kareena Kapoor Khan, Bhumi Pednekar, Vicky Kaushal and Anil Kapoor in the leading roles. If reports are to be believed, Janhvi will make her South debut with the N.R. Reddy directorial, Umaadhi.

PEOPLE HAVE PLEDGED SO FAR
Janhvi Kapoor’s quirky reaction to her own birthday cake will leave you in splits; see pic
Kartik Aaryan's b'day wish for Janhvi Kapoor has an important message, 'CoronaStopKaroNa'
Boney Kapoor wishes daughter Janhvi Kapoor: 'You have grown up to be a beautiful person'
Sara Ali Khan donates to PM Fund, urges fans 'do a good deed' for 'those in need'
Ali Fazal dons Batman mask for 'quick delivery' to needy; Richa says 'Oh my heart', Watch
Richa Chadha learns this major life lesson from her kitchen
Covid-19 outbreak: Celebs who preferred not to divulge the amount of their donations
Saif Ali Khan proves he is the perfect husband as he gives 'champi' to Kareena Kapoor Khan
DO NOT MISS
MAHA SLASHES 60% SALARLY FOR MLAS
MALLYA ASKS INDIAN GOVT FOR HELP
CELEBS MOURN ABDULLAH'S DEATH
KURNOOL INSPECTOR'S AWARENESS
BJP & CONG IN SPRAY FIGHT
JAVED MIANDAD'S DIG ON CRICKETERS