Kajol made her fans nostalgic as she recreated the 'Ja Simran Ja' moment on the set of dance reality show Dance +5. Check out what happened on the show.

Dilwale Dulhania Le Jayenge or DDLJ is known for being the longest-running movie in the history of Bollywood. The movie stars Kajol in the lead role.

Kajol along with master Remo and Punit recreated the end sequence of the movie, which is the famous Ja Simran Ja moment on the set of the show on a contestant's request. While Remo played the role of Kajol’s father, the contestant played the role of her hero. Kajol ran in slow motion towards her hero, who was waiting for her in a moving train. He also recited the famous dialogue Bade Bade Deshon Mein from the movie.

Kajol was later accompanied by Ajay Devgn on the stage as he gave her some flowers. 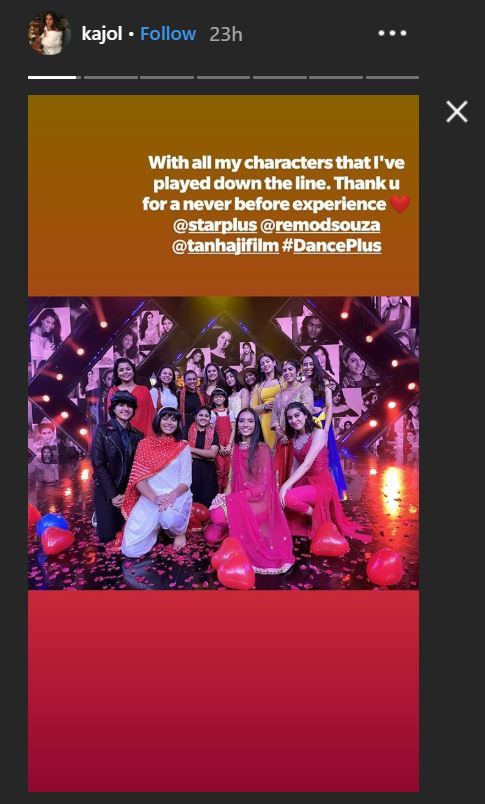 Kajol looked divine in a maroon coloured Manish Malhotra attire. While Ajay Devgn wore a black shirt with a grey coloured pair of trousers. He wore a pair of black coloured footwear to complement the look.

Kajol also posted a picture on her Instagram story thanking the contestants for performing a dance that owed tribute to all the characters she had played.

Tanhaji: The Unsung Warrior is a historical drama that revolves around the life of a 17th-century Maharashtrian Marathi military leader, Tanaji Malusare.

Ajay will be essaying the role of the warrior while the role of his on-screen wife will be played by his actual wife, Kajol. Tanhaji: The Unsung Warrior has been directed by Om Raut, while the film has been produced by Ajay Devgn and T-Series.

The movie- Tanhaji: The Unsung Warrior will hit the theatres on January 10, 2020.

PEOPLE HAVE PLEDGED SO FAR
LATEST NEWS
View all
1 hour ago
Bhumi Pednekar or Tara Sutaria; whose neon orange look is your favourite?
55 mins ago
Amitabh Bachchan's highest grossing films on Rotten Tomatoes; From 'Pink' to 'Khakee'
55 mins ago
Ayushmann Khurrana's superhit peppy songs from his popular films to dance on
54 mins ago
Farhan Akhtar's 'Bhaag Milkha Bhaag': Here are reasons to watch his first biopic film
1 hour ago
Deepika Padukone or Kangana Ranaut: Who wore the strapless red gown better?