Kalki Koechlin posts pictures of stained cloth nappies on her social media. The picture leaves fans divided as some appreciate the candid post. Read ahead

Actor Kalki Koechlin has been updating her fans through social media on how she is coping up with parenting. She recently shocked her Instagram followers by posting pictures of cloth nappies with poop stains. Her followers can be seen getting freaked out while a few also find the picture disgusting.

Kalki Koechlin recently posted pictures of three stained cloth nappies on her official Instagram handle. In the pictures posted, she has placed three used nappies of her baby girl, Sappho. She has written in the caption for the post that she has constantly been changing nappies for a while now. She has written that three nappies were stained by her baby in a gap of five minutes. She used the hashtag “shit gets real”. In the comments section of the post, people can be seen freaking out over the unexpected picture that turned up on their Instagram feed. A few people can be seen telling her that she has been changing the nappies too quickly while others can be seen expressing dislike over the post. People can also be seen liking the post for the reality showcased in the picture. Have a look at the picture from Kalki Koechlin’s Instagram here. 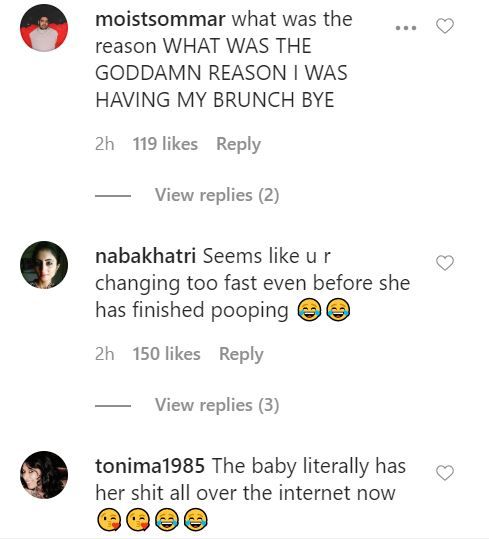 PEOPLE HAVE PLEDGED SO FAR
LATEST NEWS
View all
2 hours ago
Amitabh Bachchan gave moving performances as a lawyer in THESE movies
3 hours ago
Alia Bhatt happy to be part of 'Harry Potter at Home', reads out chapter eight for fans
3 hours ago
Amitabh Bachchan played the role of a cop in these films; see list
3 hours ago
'Ghar Ki Murgi...': Twinkle Khanna on Akshay Kumar forgetting to tag her in 'Padman' post
1 hour ago
Twinkle Khanna and Akshay Kumar's adorable Twitter banter & other top stories of the day