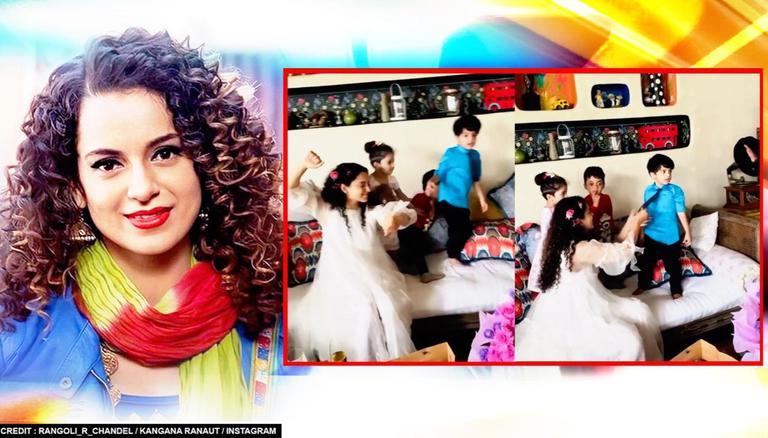 After ushering in the New Year with her family in Mumbai, Kangana Ranaut hosted a brunch for the team of her upcoming film, Dhaakad. After giving a glimpse of the decorations, Kangana’s sister Rangoli Chandel shared a video on Instagram where the Manikarnika actress can be seen dancing with the children on a peppy track Sadi Gall from her film Tanu Weds Manu. Giving those angelic vibes, the actress is looking beautiful in a white dress while grooving with the kids which also included her nephew Prithvi.

Kangana channelled her inner child in the video along with the children as they are seen jumping around on the couch and dancing. While captioning the post, Rangoli wrote, “Kadi Saddi gali pull ke bhi aaya karo,” along with a heart emoji. Earlier in the day, Kangana shared a video where she can be seen decorating her house with the help and preparing for the surprise for her Dhaakad team. The actress thought to acknowledge the entire team for their tireless work skills.

Meanwhile, the actress has been busy fixing up her wardrobe and cleaning her things on New Year’s Eve. She had shared a picture on Twitter where she can be seen ditching the New Year's party while cleaning her wardrobe. Kangana who is in Mumbai these days also visited the Siddhivinayak temple with her sister Rangoli Chandel. The actor was dressed in traditional attire as she visited the temple. In the pictures, shared by the actress, Kangana is seen with her sister Rangoli as they are surrounded by security guards. The actor opted for a complete traditional attire. She can be seen wearing a silk green saree that had a golden border. She accessorized her look with a necklace and a traditional nose ring. She also wore flowers in her bun and smiled for the cameras. Kangana Ranaut had last visited Mumbai when BMC demolished her property on September 9. On the work front, the actress who recently completed the shooting for her upcoming film Thalaivi where she will be seen playing the role of former Tamil Nadu chief minister J Jayalalithaa. Apart from this, she will also feature in Dhaakad and Tejas.

The amount of hostility I faced for standing up for my beloved city Mumbai baffled me, today I went to Mumba devi and Shri Siddhivinayak ji and got their blessings, I feel protected, loved and welcomed. Jai Hind Jai Maharashtra 🙏 pic.twitter.com/sxT583P5w2