Kangana Ranaut Stands By 'PoK' Analogy As She Leaves Mumbai; Says 'I Was Terrorised'

Kangana Ranaut who is involved in an intense war of words Shiv Sena, is set to leave Mumbai on Monday after her meeting with Governor Koshiyari on Sunday

Bollywood actor Kangana Ranaut who is involved in an intense war of words the Shiv Sena is set to leave Mumbai on Monday after her meeting with Maharashtra Governor Bhagat Singh Koshiyari that took place on Sunday. Taking to Twitter, Kangana recalled the constant attacks and abuses hurled at her, and also the attempts to demolish her office by BMC. Giving it back to Shiv Sena over its series of threats and attacks on her, Kangana said her "analogy about PoK was bang on", in a parting shot that saw her repeating the line of argument that the Sena has used to justify all its acts against her. 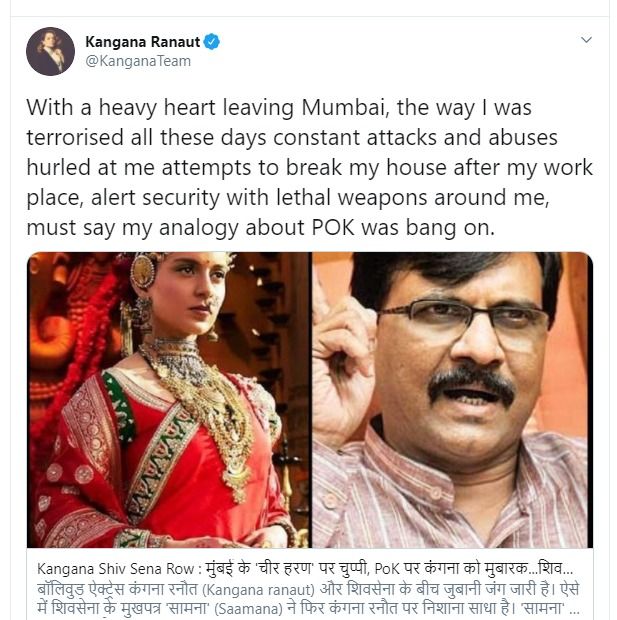 "When the defenders are declaring to become devourers, like reptiles ripping democracy, they are making a big mistake by considering me weak, they are reducing themselves by scaring a woman!!" she said in another tweet in Hindi.

The war between the Kangana and the political party escalated after Shiv Sena-led BMC partially demolished Kangana Ranaut's office at Bandra in an unnaturally hurried pace even as the actor was not in Mumbai and in fact, was to land in Mumbai the same day. The actor met Governor Koshiyari on Sunday and explained to him her "point of view". Talking to reporters after the meeting that took place at the Raj Bhavan, the actor said, "I met the Governor. He heard me as a daughter. I came to meet him as a citizen. I have nothing to do with politics."

In reaction to Kangana's meeting with the Governor, Shiv Sena MP Sanjay Raut said on Sunday that Sena had decided not to talk about the issue but is noting everything, as part of his sharp comedown with his party facing flak on virtually all fronts.

"We have decided not to say anything. We are going to listen and noting it. History cannot be forgotten. We are saying which party is saying what on Maharashtra because power has been lost by them. We will not raise such issues, we will raise questions of national importance - China, economic slowdown," he said.

Taking note of Shiv Sena MP Sanjay Raut's derogatory language against Kangana, BJP leaders in Himachal Pradesh have filed a criminal complaint against Raut. The BJP leaders maintained that the foul language used by Raut against Kangana has resulted in outraging her modesty on a public platform. Quoting Sanjay Raut’s dialogue with a reporter where the Sena leader is seen hurling abuses against the actress for her remark on Mumbai city, the BJP leader stated that Raut’s remarks - specifically a horrific 'H---khor' abuse - showed no fear of the law as he is ‘protected’ from all offences. Raut later turned the entire matter into a joke by claiming that in his eyes the translation of the word was 'naughty'.

"Sanjay Raut, out of rage, not only abused and insulted Kangana Ranaut but showed scant regard to the law of the country and blew it in the air by disgracing and demeaning the law as he is invincible and protected from all the illegalities and offences,” the complaint dated September 12 read.