Bollywood actor Kangana Ranaut has shared another poem called 'Aasmaan' written by her, with a video that she features in and is shot at her home amid lockdown.

'Queen of Bollywood' Kangana Ranaut is a treasure of talents and she has been taking her time to showcase them while under self-quarantine at her home. Earlier on Monday, the actor's official social media page launched a new poem titled Aasmaan, written by the actor. Her team also shared an artistically shot video featuring the Manikarnika actor with the poem as the voiceover in Kangana's voice.

The thoughtful words, written by Kangana Ranaut, through the poem strike a chord in the heart as it uses the sky as an analogy for our feelings which always linger even if we ignore them. The team shared the video and the poem through the Instagram page and wrote,"#KanganaRanaut reveals another treasure from her innumerable talents." The poem has been "penned and directed by her and is truly food for thought in these testing times," the caption read.

Have a look at the poem: 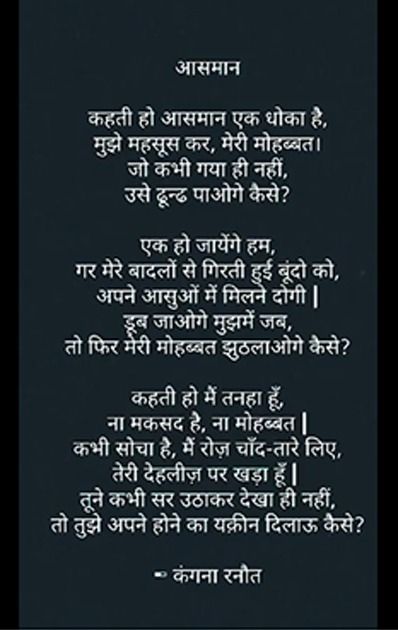 On Mother's Day, earlier this month, Kangana had shared another poem written by her for all mothers and dedicated to her mom Asha Ranaut. Her official Instagram account, managed by her team, featured a post with the poem titled 'Mother' which speaks about a child's longing for its mother. Kangana Ranaut also shared a video where she can be seen reciting the poem written by her. The post was captioned, "They say a mother understands what a child does not say, today let's tell them out loud. Let's make #MothersDay extra special for our mothers by telling them what's in our hearts!!

What's next for Kangana Ranaut?

Kangana Ranaut was last seen in Ashwiny Iyer Tiwari's last film Panga where she essayed the role of a mother. Her ambitious project Thalaivi is due to release on June 26, 2020. After Thalaivi, Kangana Ranaut will be seen in a fiesty and fierce avatar in the action film Dhaakad, directed by Razneesh Ghai.

Dhaakad was supposed to have a Diwali release this year but it seems that the ongoing COVID-19 pandemic has spelt trouble for the film. She will also don the Indian Air force uniform for her role in Tejas.

PEOPLE HAVE PLEDGED SO FAR
LATEST NEWS
View all
12 hours ago
Ananya Panday paints first unofficial poster of 'Khaali Peeli'; fans call it 'struggle'
9 hours ago
'From Sara ka Sara to Sara ka aadha': 'Kedarnath' actor shows transformation in a video
13 hours ago
Sutapa Sikdar puts up heartfelt note mourning one month of Irrfan Khan's sad demise
12 hours ago
'Because I'm just a human who's allowed to...': Zaira Wasim returns to Twitter, Instagram
12 hours ago
From a salute to Sonu to 'Boycott China'; Here's Entertainment news recap of the day