Kareena Kapoor Khan is one of the most prolific actors in Bollywood. In the recent video, Kareena can be seen multitasking and fans are all gaga over it, watch.

Kareena Kapoor Khan is one of the most prolific actors in Bollywood. She goes on to enjoy a huge fan following as fans adore her acting skills, personality and stylish appearance. This Bollywood diva has charmed several people with her glamourous avatar and seems like she’s done it again but with a twist. A recent video from one of her previous shoots proves that Kareena Kapoor Khan is not just glam diva but is also a multitasker.

Kareena Kapoor Khan’s hairstylist recently took to Instagram to share a throwback behind-the-scenes video from one of her shoots. In the video, Kareena Kapoor Khan can be seen dressed in a dark turquoise coloured thigh-slit gown. And while her hairstylist is seen styling Kareena’s hair, the actor seems to be busy on her phone.

The actor also opted for kohled eyes and blush pink makeup. The picture proves that she is an expert in multitasking because as she gets ready for her shoot, the actor also seems to be getting other work done through her phone. Check out the video below.

After seeing the post, fans went on to praise the actor for her stunning avatar. Some also went on to laud her hairstylist for always helping her ace her looks by styling her hair. The post received several likes and positive comments. Some of the fans wrote, “she is so good,” “The best,” “The best hairstylist in the world,” and much more. Check out a few more comments below. 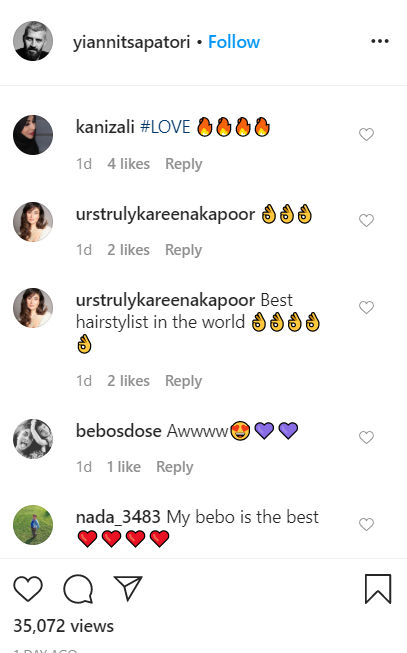 Earlier, Kareena Kapoor Khan went on to share a bright and happy throwback post along with her team posing in a mustard field. The actor looked elegant in an off-white floral printed kurta that she paired with a salmon-pink dupatta and cream coloured churidar. Kareena also opted for simple and minimum makeup and a messy hairdo. Check out the picture below.

Kareena Kapoor Khan will next be seen in the Laal Singh Chaddha. The film is directed by Advait Chandan and also stars Aamir Khan in a pivotal role. The film is an official remake of the 1994 American film, Forrest Gump. The film is reported to release in December 2020 but it seems like the film might get pushed for another release date due to the COVID-19 outbreak.