This throwback picture of the Kareena Kapoor Khan and Rani Mukerji will take fans down the memory lane and remind them of the duo's special film. See pic.

Kareena Kapoor and Rani Mukerji are one of the most well-known celebrities in Bollywood. The two have worked together in several movies and also share a good on-screen and off-screen bond.  And this throwback picture of the two divas will take fans down the memory lane and remind them of the duo's special film.

This stunning monochrome picture of Kareena Kapoor Khan and Rani Mukerji is unmissable. The two look gorgeous as they are all decked up. In this picture, Kareena Kapoor Khan opted for simple makeup with kohled eyes, sleek hairdo and studded earrings. While Rani Mukerji opted dewy makeup with a pair of long jumkas and a nose pin. Check out the stunning picture of the divas.

Seeing this picture, fans went on to comment on all things nice on this post. However, this picture also took them down the memory lane as this picture reminded them of Kareena Kapoor Khan and Rani Mukerji’s hit film, Mujhse Dosti Karoge! As one fan went on to write “Tina & Pooja #mujhedostikaroge” while the other fan wrote, “Mujse Dosti Karogee”. Check out a few comments by fans below. 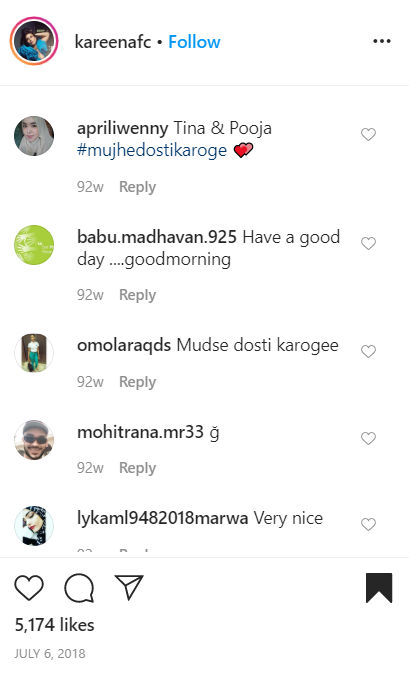 Kareena Kapoor Khan and Rani Mukerji starred alongside Hrithik Roshan in the hit film Mujhse Dosti Karoge! The film received praise and love from fans and movie buffs. The film was helmed by Kunal Kohli and bankrolled by Yash Raj Films. The film revolved around a young man (Hrithik Roshan) from London who mails his friend (Kareena Kapoor Khan) since childhood and then falls in love with her. He later realises that the girl he used to e-mail was his friend’s best friend, Pooja (Rani Mukerji).

PEOPLE HAVE PLEDGED SO FAR
LATEST NEWS
View all
1 hour ago
Bhumi pednekar and shanoo sharma's pictures that showcase their camaraderie
33 mins ago
Nushrat bharucha-luv ranjan and other successful actor-director duos who set bo on fire
26 mins ago
Viineet kumar talks about 'betaal'; says 'when you experiment, backlash is expected'
1 hour ago
Deepika padukone or jospehine skriver, who wore the red gown better?
1 hour ago
Bhumi pednekar's heartfelt captions dedicated to her family members