Unseen Pic Of The Day: Kareena Kapoor & Taimur's This Pic Surely Leave You In 'awe'

An unseen picture of Kareena Kapoor Khan and Taimur Ali Khan has been surfacing the internet and fans can’t stop swooning over how adorable the picture is.

Ever since her Instagram debut, Kareena Kapoor Khan has been quite active on the gram. Right from sharing some cute moments with Saif and Taimur to taking a trip down memory lane, the actor has been sharing it all. Recently, an unseen picture of Kareena Kapoor Khan and Taimur Ali Khan has been surfacing the internet and fans can’t stop swooning over how adorable the picture is.

Shared by one of her fan pages, in the picture, Kareena can be seen goofing around with Taimur and are all smiles in the candid picture. Kareena can be seen sporting a peach coloured floral outfit. She also completed her look with an oily hairdo, well-done brows and no makeup. Taimur can be seen wearing a white kurta. The picture of the duo is too cute to miss.

Along with the post, the fan page also went on to comment on all things nice. It read as, “Good morning with the cutest picture I’ve ever seen”. Take a look at the picture below.

Seeing this post, fans could not stop themselves from commenting on the post. The post has been garnering heaps of praise and positive comments. Some of the users commented on how much they love the picture and the duo, while some were all hearts over it. One of the users wrote, “Purest love…” while the other one wrote, OMG, this literally made my day even more amazing”. Take a look at a few more comments below. 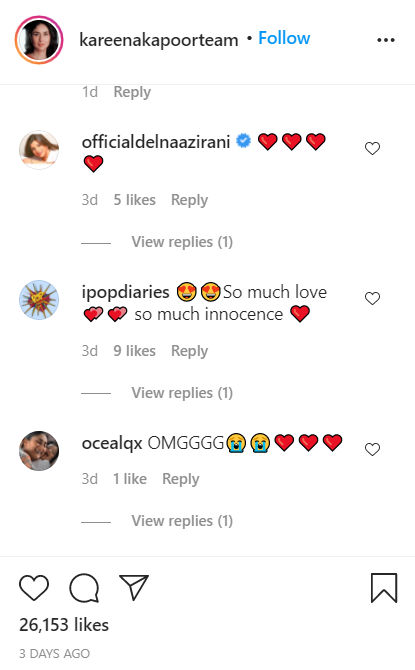 Apart from this post, Kareena herself goes on to share adorable pictures of her a Taimur. Recently, Kareena shared an adorable picture of her son. This photo shows Taimur Ali Khan posing with his new painting which is a lion, the king of the jungle. The next photo shows Taimur hiding his face behind a lion's toy and that he pretends to be one. Adding a caption to the post, Kareena wrote, "Who is the king of the jungle now?" Take a look at the post below.

Also read | Unseen Pic Of The Day: Kareena-Saif's This Wedding Pic Will Give You 'Modern Family' Vibes

Also read | Unseen Pic Of The Day: When Kareena, Saif & Taimur Were All Smiles At The Beach