Unseen throwback pictures of Kareena Kapoor Khan with her crew chilling and enjoying eating food between shots on sets are doing the rounds on social media.

Kareena Kapoor recently became a mother for the second time and welcomed her baby boy. Recently, photos of Kareena Kapoor that were shared by her hairstylist Yianni Tsaptori has been doing the rounds on social media. The picture was posted around 3 weeks ago when Kareena was finishing up her shoots and brand deals before going on maternity leave.

The first picture shows a heavily pregnant Kareena Kapoor Khan doing her signature pout along with her crew for the gram. The second picture has Kareena Kapoor Khan giving a toothy smile to the camera while holding what seems to be a cheese board in her hands. The photos are from Kareena’s shoot.

Also Read: When Kareena Kapoor Khan Was Spotted Stepping Out With Son Taimur; Have A Look

Vogue editor and stylist Anaita Shroff and Poonam Damania commented on the photos and dropped heart emojis in Yianni’s comment section. Kareena’s fans also poured their love for the actress by dropping a ton of heart and fire emojis in the comment section. One user wrote, “wow so beautiful bebo” another commented, “Best bebo with best team.” Read some of the comments below: 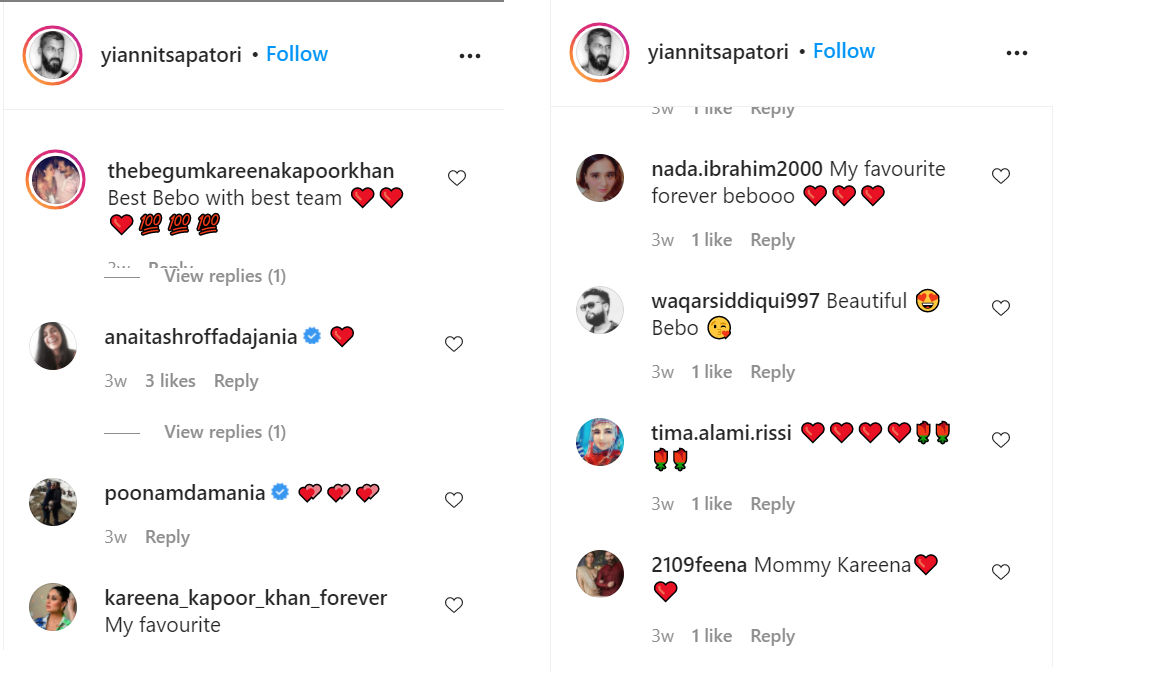 Also Read: Kareena Kapoor Khan Talks About What It Is To Be A Parent, Reveals Glimpses From Her Album

Just a few days after delivering her baby boy, Kareena Kapoor made a comeback to Instagram by posting a selfie on March 1 sharing that she missed her fans and the social media platform. Arjun Kapoor commented on the picture with “Roast chicken glow.”

The actress had recently posted the movie poster of Bhoot Police that stars her husband Saif Ali Khan along with Arjun Kapoor, Jacqueline Fernandez and Yami Gautam which is set to hit the screen on September 10.

Kareena Kapoor's pregnancy journey has been extensively covered by the paparazzi and the media. She has recently announced on her social media that she is coming up with a new book that will be a guide for all the new moms to be titled Kareena Kapoor Khan's Pregnancy Bible that will be published sometime later in 2021.

Kareena Kapoor Khan and Saif Ali Khan welcomed their second child on February 21 2021. Kareena Kapoor's baby boy Taimur who is now four was also snapped visiting his mother and his little brother at the Breach Candy hospital in Mumbai.