Amid the self-quarantine due to coronavirus outbreak in the country, Kareena Kapoor shared what Taimur drew and coloured, filing it under 'QuaranTimDiaries'.

With the restrictions of a national lockdown imposed throughout the country, actors Kareena Kapoor and Saif Ali Khan's little boy Taimur has been painting the internet red with his adorable artwork. Kareena shared a picture of the toddler's drawing through her Instagram stories and captioned it, "The world is your ice-cream my love". The proud mother of the three-year-old favourite starkid also called him the 'in-house Picasso' for the scribbles and colourful drawing of ice-cream. 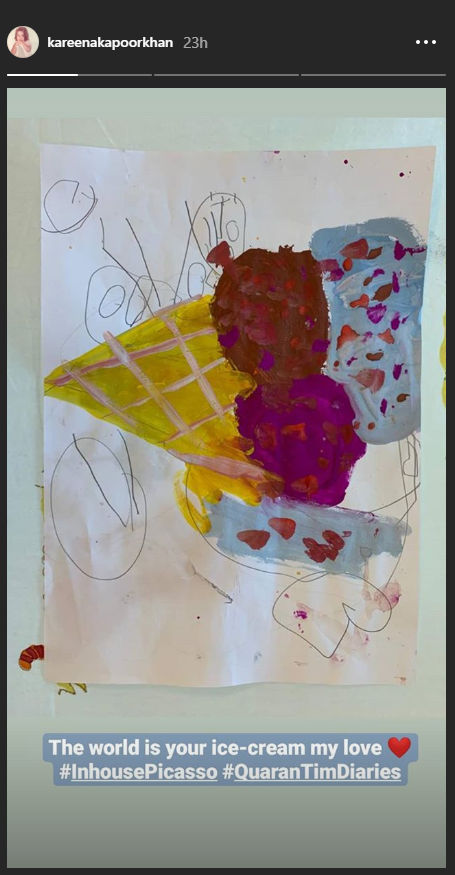 Kareena Kapoor has been actively updating her social media account with pictures of Taimur among others from her family and giving his fans a treat. On Sunday, March 22, the Jab We Met actor had also supported the Prime Minister's initiative of 'janta curfew' along with husband Saif Ali Khan and little Taimur. She posted a picture of the duo and captioned it, "My boys doing their bit! Together, let's make the world a better place for us all. Play your part... #StayHome #StaySafe #JantaCurfew"

Meanwhile, India has reported 1024 cases of Coronavirus/COVID-19 as on date. While 95 have recovered successfully from the deadly virus, 27 people have lost their lives. Be it film shootings, theatres or malls, state governments have advised the citizens to avoid stepping out and follow all precautions like washing hands and other hygiene practices to prevent the spread of the virus.

What's next for Kareena Kapoor?

Kareena Kapoor will be seen next in Advait Chandan's upcoming film Laal Singh Chaddha along with her 3 Idiots co-star Aamir Khan in the lead. The film is the official Hindi remake of the 1994 Hollywood film Forrest Gump and is scheduled to release in theatres on Christmas this year.